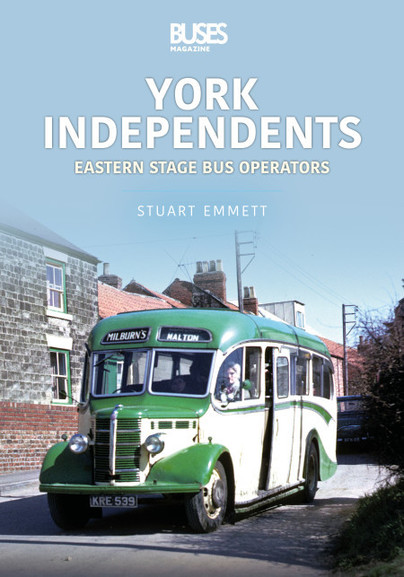 Add to Basket
Add to Wishlist
You'll be £11.99 closer to your next £10.00 credit when you purchase York Independents. What's this?
+£4.50 UK Delivery or free UK delivery if order is over £35
(click here for international delivery rates)

The splendid city of York lies on flat, arable land called the Vale of York. Once out of the

city and into the Vale of York, many beautiful small country villages are hidden away in the flat, fertile, agricultural land that dominates the area, and farms line the roads. Bus operators were needed to provide services linking these local villages and towns with York, especially

on market days. Consequently, routes were very rural, and besides catering for the traditional market day shoppers, they often carried a considerable volume of passengers to work in York.

This book, containing over 150 photographs, many in colour, tells the story of stage bus

Brothers, who operated from the east of York. All of these companies had similarities and, like many rural bus services, they started by running a service to their nearest market town. This was often done to get a second income to supplement their main living, which usually came from farming and agriculture. As time progressed, most of the operators grew their bus network and also offered excursions and private hires. However, changes to the way of life in the 1950s and 1960s, including the growth of television and car ownership, led to the demise of many true country bus operators, including all of those featured in this book.