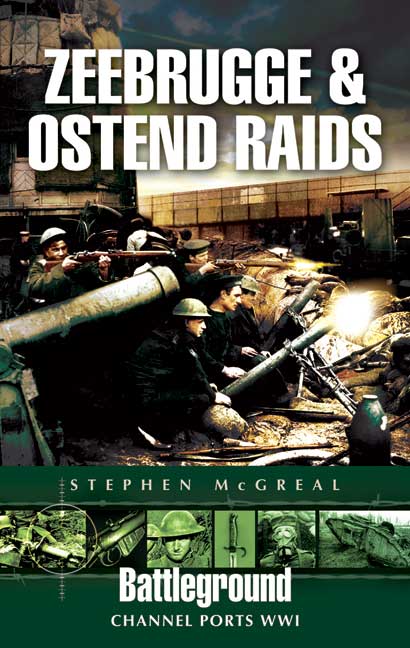 Add to Basket
Add to Wishlist
You'll be £12.99 closer to your next £10.00 credit when you purchase Zeebrugge & Ostend Raids. What's this?
+£4.50 UK Delivery or free UK delivery if order is over £35
(click here for international delivery rates)

The unrestricted U-Boat war threatened the very survival of Britain, whose reliance on imported food and war materials was her Achilles' Heel. A significant element of the German submarine fleet operated from the occupied Belgian ports of Zeebrugge and Ostend. After careful planning the Royal Navy launched audacious attacks on these two ports on St Georges' Day 1918. Five obsolete cruisers and two Mersey ferries supported by a flotilla of smaller vessels penetrated the near impregnable defences, while Royal Marines and naval storming parties battle ashore in a diversionary attack. At the time of the action the concrete filled block ships were scuttled in the ports' approaches. Despite being a costly and bloody affair for the participants, the survivors returned to acclaim. The raids gave a fillip to the national morale, at a time of depressing news from the Front. To underline the success of the affair no less than 11 Victoria Crosses were awarded.

McGreal's work tells the story in great detail... As a handy starter to these actions, it can hardly be faulted. For the regular battlefield tourist looking for something new on the way to or back from the Western Front, 'Zeebrugge and Ostend Raids' is an excellent addition to the itinerary.

..this work fills a significant gap in the series as it documents an operation that Winston Churchill called ‘the greatest naval feat of arms during the Great War’. On the eve oif St Georges Day 1918, the Royal Navy launched an audacious attempt to seal the outlet to Zeebrugge and Ostend harbours. Five obsolete cruisers and two Mersey ferried, supported by a flotilla of small craft, penetrated the impregnable defences while the Royal Marines and naval storming parties battled ashore in a diversionary attack. The whole thing was a bloody and costly affair for all involved, through the raid boosted national morale during a time of unrelenting bad news coming from the Western Front. No less than nine VCs were awarded for the Zeebrugge raids and two more for the Ostend raids. This book (published in 2007) is both extremely well written and very well illustrated and is worthy of being added to your Great War collection.
A classic in the making, 10/10

World War I: The British Navy, commanded by Admiral Keyes, raids the German submarine base at Zeebrugge.