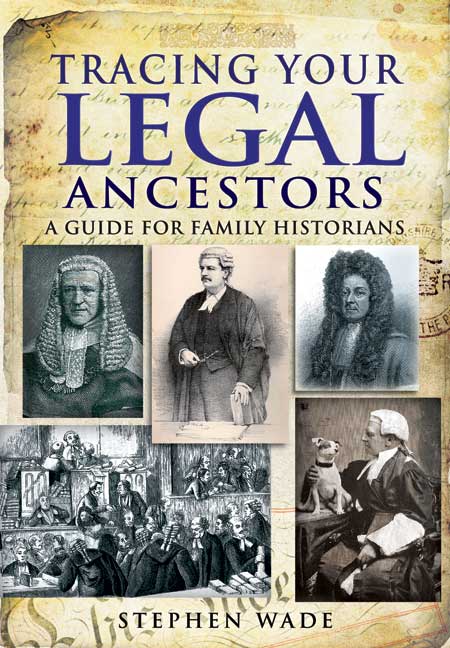 Add to Basket
Add to Wishlist
You'll be £14.99 closer to your next £10.00 credit when you purchase Tracing Your Legal Ancestors. What's this?
+£4.50 UK Delivery or free UK delivery if order is over £40
(click here for international delivery rates)

The law had as much influence on our ancestors as it does on us today, and it occupies an extraordinary range of individuals, from eminent judges and barristers to clerks and minor officials.Yet, despite burgeoning interest in all aspects of history and ancestry, lawyers and legal history have rarely been looked at from the point of view of a family historian. And this is main purpose of Stephen Wade’s accessible and authoritative introduction to the subject.

Assuming that the reader has little prior knowledge of how or where to look for such information, he traces the evolution of the law and the legal professions. He describes the parts played in the system by solicitors, officers of the High Court, registrars, recorders, town clerks, clerks of the peace, proctors, coroners, notaries, parliamentary agents, judges, barristers and magistrates. Also he identifies the various archives, records and books that the family researcher can turn to, and discusses other sources including the internet.

Stephen Wade’s concise account of legal history and research resources will be an invaluable guide for anyone who is studying the subject or seeking an ancestor who was associated with it.

Stephen Wade is a freelance writer specializing in the history of crime and the law in Britain and Ireland. He has written fourteen true crime and crime history books, including Tracing Your Police Ancestors and Tracing Your Criminal Ancestors. His history of detectives, Plain Clothes and Sleuths, was published in 2007 and he is currently completing a history of the City of London Police. He also teaches crime history at the University of Hull and, as a visiting lecturer, at Oxford. He has contributed to Family Tree Magazine, Ancestors and other periodicals.

As featured in 'useful sources' part of 'My Ancestor was a...Lawyer' feature

The book by Stephen Wade, is an easily read comprehensive introduction to practitioners in the law profession whose roles are discussed and the sources of information for their career histories identified. The books in this series will provide an insight into the working of the selected profession or trade and point readers to the sources available to trace an ancestor’s career.

Despite burgeoning interest in all aspects of history and ancestry, lawyers and legal history have rarely been looked at from the point of view of a family historian. And this is the main purpose of Stephen Wade's accessible and authoritative introduction to the subject.

He traces the evolution of the law and the legal professions. He describes the parts played in the system by solicitors, officers of the High Court, registrars, recorders, town clerks, clerks of the peace, proctors, coroners, notaries, parliamentary agents, judges, barristers and magistrates.

Family historians with legal connections in the past will find this book very useful. It explains the way in which the legal systems works today, how that systems grew up over the ages, and how it worked in the past, and there is full coverage of the sources of information about any legal ancestors. It is useful book to consult rather than to buy unless, of course, you are descended from a long line of lawyers. Most family historians are likely to turn up, at best, just one of two 'legal ancestors', but this helpful little book should be available in the local library or record office.

The latest edition of Pen and Sword's "Tracing" series focuses on those who worked within the legal professions, concentrating mainly on England and Wales, though with an additional chapter on Scotland and Ireland.

The book gets underwar with a background to the legal profession - what are the bar, notaries and assizes, what is the role of a coroner, etc, and how did the legal professions evolve over time? There then follows three chapters on key professions - the lawyers, the judges and the magistracy - before a detailed survey of key sources that can help you to trace their careers. The memoirs and other literary productions from the judiciary are further explored before a look at other careers associated with the legal professions, including the role of women in the industry.

Each chapter is clearly written and ends with a case study to help put the preceding discussions into context. A superb guide.

This is a comprehensive introduction to researching lawyers and the law. Stephen Wade traces the evolution of the law and the legal professions and identifies the various archives, records and books that the family researcher can turn to, and discusses other sources including the internet.

Included in the ten chapters are understanding the legal professions, an historical survey of the Judges and courts, case studies, the Scottish and Irish legal systems, and a fascinating chapter on 'The Servants to the Law Machine' setting out how the ancillary groups in the past, such as clerks, administrators, town clerks, legal secretaries and women working in the law, conducted themselves and the work they undertook.

A useful index concludes this invaluable guide for anyone who is studying the subject or seeking an associated ancestor.

The law had as much influence on our ancestors as it does on us today, from judges and barristers, to clerks and minor officials. But despite this, lawyers and legal history has rarely been looked at from the point of view of a family historian. So author Stephen Wade has set out to rectify this; he traces the evolution of law and the parts played in the legal system, he also identifies archives, records, books and internet sources.

In just 200 pages, Wade introduces the multifaceted activities associated with the legal profession, and suggests plenty of sources of further information on individuals who worked in law.
The author clearly has a thorough grasp of the topic and some of the illustrations are taken from his own collection.

I have a friend whose main ambition in his life is to marry three of his daughters off to members of the legal profession. The other, and again with self-interest at heart, he is hoping to save for a plumber. Although he has only recently come in to his own, for centuries the law has dominated our lives. But how does it all work? How exactly does the solicitor, officer of the High Court, registrar, recorder, coroner, judge, barrister and magistrate fit into the structure? Your great uncle Henry, it turns out, was a clerk of the peace - so what was his part in the day-to-day running of the country's courts? Stephen Wade has the answers to these and almost every other question you may have to ask. He covers legal history, takes us through the Scottish and Irish Legal system, as well as that practised in England and Wales. He points out the importance of understanding legal terms and in doing so provides his readers with a handy six-page glossary of those we would be most likely to encounter in our family history research. Some 30 pages, out of the books 189, are dedicated to sources of information. Here, with its names, dates of appointments and addresses, The Law List is illustrated and explained, as are the Surtees and Selden societies, both of which provide much in the way of texts relevant to legal history. We are also pointed towards, and shown what to look for, in county record offices, newspaper reports, parliament and state papers, and, of course, The National Archives. A relative in the legal profession or not, this book is a good read and well worth having.

The British legal system is horribly complicated and confusing – Quarter Sessions, Assizes, Magistrates, County Court, High Court to name but a few. There are lawyers, barristers, judges, recorders, registrars, clerks and coroners to name but a few more. Its hard enough to understand for those of us who have studied it for a while, so for the family history enthusiast finding that they have a lawyer in the family, it must be terrifying to know where to start. This book gives a good starting point.

I would go further however, and suggests that this is actually probably quite useful to read if you find that you have a criminal ancestor, as it gives a great description of the legal system. Therefore, you will be able to gain a much better understanding of the system that you ancestor will have gone through, and the people who would have defenced, prosectuted and sentenced them.

Never the less, this is a very useful book indeed. I must confess, it doesn’t sound like the most rivetting read, and its probably not something you would pick up purely for fun. But if you find thats one of your ancestors was a lawyer or judge or such like, this would be an ideal guide. As usual with the ‘Tracing your… Ancestors’ series there are plenty of useful resources listed, and – particularly useful in this case – a sizeable glossary of tecnical legal terms.

Its on my bookshelf just in case!