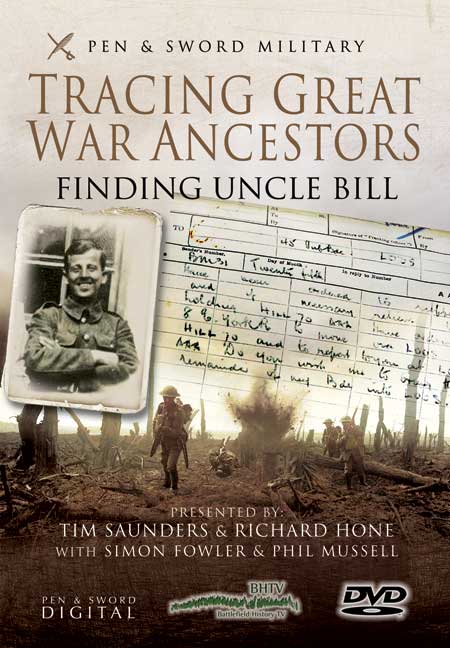 Add to Basket
Add to Wishlist
You'll be £9.99 closer to your next £10.00 credit when you purchase Tracing Great War Ancestors DVD. What's this?
+£4.50 UK Delivery or free UK delivery if order is over £35
(click here for international delivery rates)

Never before have so many resources been available to the family historian tracing Great War ancestors, both online and locally but the past dearth of easily accessible material has now been replaced by a blizzard of information that needs its own skills to navigate. This highly detailed DVD is split into three parts that deal with the various methods of tracing your ancestor. In part one, expert genealogist Simon Fowler shows Richard Hone the ropes, with some surprising results.

Armed with details of Richard's great uncle William Pye's service between 1914 and 1918, the film sets out with battlefield historian Tim Saunders to 'Find Uncle Bill' and trace his war on the Western Front to his death just weeks before the Armistice. Their journey takes them from his first battle at Loos, via the Somme and Passchendaele, to his last battle and lost grave in the Ypres Salient.

In the final part of the DVD, entitled 'Uncle Bill's Medals', Richard visits Phil Mussell, editor of Medal News Magazine who explains which campaign medals that the five million British and Empire soldiers who fought in the Great War would have been entitled to as a result of their active service.

Former soldier, military vehicle expert and presenter for Battlefield History TV, Richard Hone, has his origins firmly in Sunderland. Richard’s Great Uncle Bill, William Pye, died in the Great War somewhere on the Western Front. With his passion for military history, Richard sets out to trace the war time service of his Great Uncle Bill on the battlefields of France and Flanders in what is a highly personal journey.

The main thread of the story is entertaining and educational.

Ideal for less experienced researchers and useful for those with greater knowledge and experience. A 'well done' is due to the production team.

Most of you will be aware that there are a multitude of books about the First World War including ones that explain how to research WW1 soldier ancestors, but this is one of the few research aids available in DVD format. This new DVD pulls together really good advice on how to approach your research with factual information about the conflict and original photographs and film footage.

The DVD has three sections which can be selected from the main menu. The main feature is the story of how one man tried to discover the part played in the conflict by his Uncle Bill, from the moment he enlisted until his death at the end of the war. The programme provides lots of background information that gives any researcher an understanding of the conditions endured by an ordinary soldier. Another section gives practical advice on how to get information about your ancestor. This covers the availability of records on the Internet, but also gives useful pointers for less obvious original sources in local, regional and national archives. A final piece provides a really good introduction to the subject of medals and how they can help with your research.

I really recommend this product. It inspired me to get the War Diaries that included my Granddad’s regiment (the 10th Battalion of the Yorks and Lancs) and has taken my personal research to another level.

This is a three-part DVD which begins with genealogist Simon Fowler leading Richard Hone through the search for his uncle William 'Bill' Pye. In part one the search begins on line and in local, national and military archives. There are many useful tips and suggestions including what to do next if you cannot find your ancestor's service records.

Part two starts with a further search of the records which allows Simon and Richard to trace Bill's Battalion and their War Diaries. Uncle Bill's war started with the 8th Battalion of the East Yorkshire Regiment and armed with addition information from www.eyreg.co.uk and www.nationalarchive.gov.uk, Simon and Richard trace Bill's war using war maps and various other military documents. The pair journey through the battlefields of Belgium and France, following Uncle Bill's journey to his death in the Ypres Salient. He was killed by a booby trap in a captured German bunker just weeks before the armistice.

In part three we visit Medal News Magazine and where editor Phil Mussell explains the campaign medals which Uncle Bill and his five million fellow British and Empire soldiers would have been entitled to. Phil also discusses possible ways of replacing and/or recovering lost medals, including http://tracker.com, a free online medal tracking service.

Also on the CD (but only accessible on a computer) is a selection of 'extras' such as a printable family tree planner, extracts from selected Pen & Sword Books, money-off vouchers and a couple of very useful research guides.

This is a really well presented and thought provoking DVD. By following the story of Uncle Bill we learn, in the most practical way, how to trace the history of our own military ancestors and a great deal about the war in Europe. This DVD will appeal not just to the family historian in you; it is also a great historical documentary.

Giving an insight into the often daunting task of tracing an ancestor who fought during the Great War, military historians Tim Saunders and Richard Hone delve into the resources available. It follows Richard's search for the story of his great uncle, William Pye, who died just weeks before the Armistice. They uncover his movements, orders of battle and final resting place at Tyne Cott cemetary.