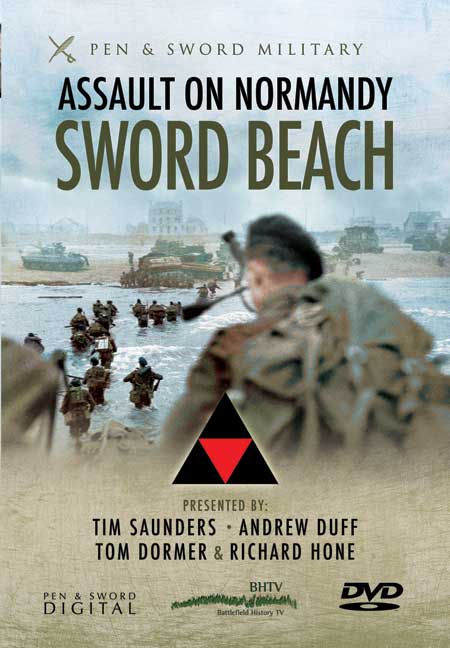 Add to Basket
Add to Wishlist
You'll be £12.99 closer to your next £10.00 credit when you purchase Assault on Normandy: Sword Beach. What's this?
+£4.50 UK Delivery or free UK delivery if order is over £35
(click here for international delivery rates)

In 1940 3rd Division, then commanded by a little known major, General Bernard Montgomery, were unceremoniously evacuated from Dunkirk but four long years later they were to return to France in the van of the D Day assault force; the greatest invasion of all time. Their task was to break through Hitler's Atlantic Wall on a stretch of Normandy beach codenamed SWORD. With the assistance of the Royal Navy and Royal Air Force they would blast their way through the concrete and steel defences that lined the beach.

Once ashore their problems were only just beginning! Montgomery had set the Iron Division a demanding D Day task, the capture of the city of Caen but the Germans were deployed in greater depth and strength than the Allies assumed and Rommel had sneaked forward 21st Panzer Division into positions immediately behind the invasion area. With bitter fighting in the villages and open ridges around Caen the two sides fought a desperate battle; the Germans knew that once firmly ashore it would be nigh on impossible to throw them back into the sea as Hitler demanded.

This film charts the operations on D Day from the build up and embarkation of the force through the crossing and subsequent assault landing. Once ashore, the programme follows the advance of 3rd Division inland to the Perriers Ridge. Here the exhausted soldiers repulsed the attack of 21st Panzer Division. Meanwhile, the Suffolk Regiment were struggling to subdue the major German HQ bunker complex codenamed Hillman, while Lord Lovat's Commandos struck off to the flanks to Pegasus Bridge and the airborne troops.

From planning and training through each objective, this DVD uses photographic celluloid, expert and veteran evidence to explain in fine detail exactly what took place on Sword and beyond that fateful day in June 1944.
Especially interesting is the interview with the son of Oberst Krug. Krug commanded the Hillman bunker south of Colleville. A treat for all world war 2 enthusiasts and especially those with a special interest in D-Day. An excellent second world war offering from the Battlefield History TV crew and Pen & Sword.

The production team is experienced in making this type of documentary and the presenters are all battlefield tour guides with excellent credentials, and it shows in the quality.
Fascinating viewing...

The BHTV team are back with a really excellent film outlining the events on Sword with a series of well constructed accounts of how the British 3rd Infantry Division came ashore and headed out to its objectives. We see the planning stage, the principal assault phases and the arrival of elite commando units.
The use of film and still archive is very well managed and there is a minimum of footage involving re-enactors. This is probably due to the range of original material available.
The strength of this film is in the immense knowledge of the presenters who make the story easy to follow and quite entertaining. The editing is solid and well paced and the addition of maps and diagrams is well handled. This is a thoroughly professional package.
All in all, this DVD is a bloody good use of your time and money and I look forward to using it as a basis for a future trip to Normandy.

Another superior documentary from battlefield History TV, detailing the various aspects of the operations on Sword Beach on D-Day; the assault landing by the 8th Infantry Brigade, the efforts of the Commandos of the 1st Special Service Brigade to capture Ouistreham and link up with the 6th Airborne Division, the attack on the “Hillman” strongpoint by the 1st Suffolks, and the battles fought with the 21st Panzer Division during the advance on Caen. Two hours are devoted to these topics, with a range of historians, very well versed in their subjects, walking the battlefield and meticulously explaining each phase as it unfolded.