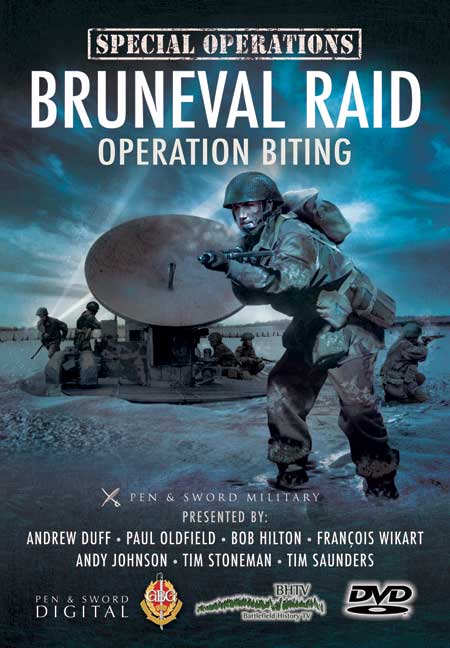 Add to Basket
Add to Wishlist
You'll be £12.99 closer to your next £10.00 credit when you purchase Special Operations: Bruneval Raid. What's this?
+£4.50 UK Delivery or free UK delivery if order is over £35
(click here for international delivery rates)

In 1941 Dr RV Jones became convinced that the Germans had developed their own radar system that would account for increasing RAF bomber casualties. The hunt was on! Eventually an enemy Würzburg system was located on the cliffs of Northern France at Bruneval and seizing it would be the solution to overcoming the enemy radar problem. A joint operation was planned by HQ Combined Ops that would involve all three Services, including the newly raised and barely parachute qualified C Company, 2nd Parachute Battalion, Commanded by Major John Frost.

The planning went well but the rehearsals involving the Royal Navy were all disastrous. As the narrow window of moon and tide approached it was decided 'to bash on'. Nine of the twelve sticks of Paratroopers were dropped by 51 Squadron and the Germans were caught napping on a winters night. However, they quickly responded and the Paras had a serious fight on their hands to keep the enemy at bay while the experts, who the Paras had orders to kill rather than let fall into enemy hands, dismantled. With the enemy closing in the job was done and the force started to withdraw but elements of Frosts plan were beginning to unravel. It seemed that they may be blocked but with the Paras converging on the beach they secured their escape on the badly delayed Royal Navy landing craft.

In Britain's darkest hour the success of the Bruneval raid was just what Churchill needed and the information gained saved the lives of many aircrew.

This is a fascinating look at the raid, and the sites which were involved. By revisiting the exact locations, the researchers have been able to compile a detailed study of the operations successes and failures. Military historians, and WW2 enthusiasts will find this DVD extremely useful and informative.

This is, as one can imagine, an exciting story and is told in the inimitable and usual way by Pen & Sword. There is detail in plenty and some very knowledgeable and articulate battlefield guides lead one through the terrain and the story. The exact places are visited and the whole operation is explained in clear and concise terms.
This was an operation of which I admit I knew little, but now I am enlightened. It was a brave and desperate incident that ultimately saved many lives and helped tremendously with the war effort. A good and instructive DVD, and one that I would certainly endorse.

One of the most dramatic operations by British forces behind enemy lines took place in late February 1942 on the Northern French coast of Bruneval. Operation Biting was a raid on the German radar system called ‘Wurzburg’. The BHTV team give an extensive insight in to the raid. By filming on locations involved in the operation the viewer gains a real perspective on events, where and how they happened.
Operation Biting was a well thought out raid that nearly didn’t go according to plan. Another well produced video from BHTV and highly recommended viewing for WW2 fans.

The film charts the operations from the build up to the assault landing. Using archive footage, interviews with veterans and photos the film offers an insight into this momentous breakout at Normandy.

This is absorbing viewing. The presenters review the successes and failures of the rain and the DVD is well up to the high standard that this presentation team has established with its military history DVDs.