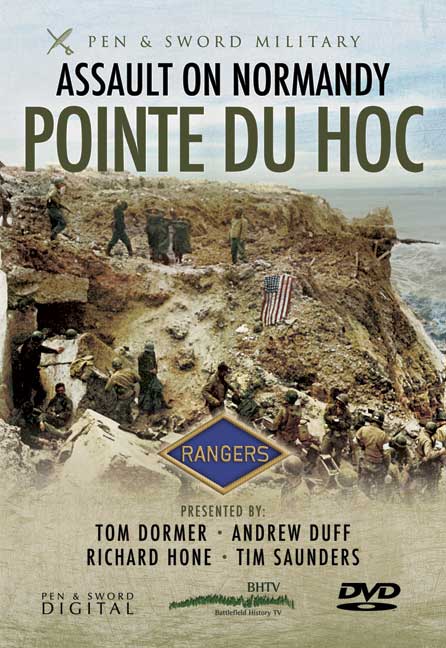 Add to Basket
Add to Wishlist
You'll be £12.99 closer to your next £10.00 credit when you purchase Assault on Normandy - Pointe du Hoc. What's this?
+£4.50 UK Delivery or free UK delivery if order is over £35
(click here for international delivery rates)

Order within the next 7 hours, 48 minutes to get your order processed the next working day!

The German battery of six 150mm guns established on Point du Hoc during 1943 covered both the American Omaha and Utah Beaches. It wasn't a suitable objective for paratroopers, who were anyway fully committed. On hearing the Ranger plan to scale the cliffs and seize the battery before the landings, experienced commanders commented that 'an old woman with a brush could sweep them off the cliffs'. To get up the hundred foot high cliffs Colonel Rudder developed and trained 2nd Rangers in scaling techniques that included sectional aluminium commando ladders, rocket grapples and ropes, plus the so called Swans–London Fire Brigade ladders.

In the event bad weather, navigational errors and communications failure meant that less than 200 Rangers were delivered to the foot of the cliffs late and under enemy fire. In an epic of American military history against every kind of difficulty, small groups of Rangers battled their way up ropes and ladders, with grenades bursting around them, to scale the muddy unstable cliff. A handful of men spread out and cleared the stunned defenders but, as often is the case, seizing the objective was only a part of the battle. Isolated for over 24 hours, with no relief from the near disaster at Omaha, the Rangers fought on against increasingly determined German counter-attacks.

For anyone interested in the real events on D-Day then this DVD is a must-have!

If you want a basic insight into the struggle at Pointe Du Hoc then this could be what you're looking for.

Location filming and another crisp production of well-lit footage has produced an enjoyable and absorbing account of one of the great European battles.

Continuing the tradition of superb documentaries from Battlefield History TV, this one devotes an impressive 90 minutes to studying the classic assault on the Pointe du Hoc battery by American Rangers on D-Day. It includes an overview of the formation and training of the Rangers, their equipment, and the special tactics which they employed in the assault to scale the perilous cliff face. A good analysis is made of the battery position as it appears today, with historians walking around the general area to give a very clear impression of the importance of the site and the types of defensive measures which were in place around it.

I really enjoyed watching this, and if you have an interest in seeing the story of the assault on the Pointe du Hoc, well explained by an experienced battlefield guide, and on the site itself.