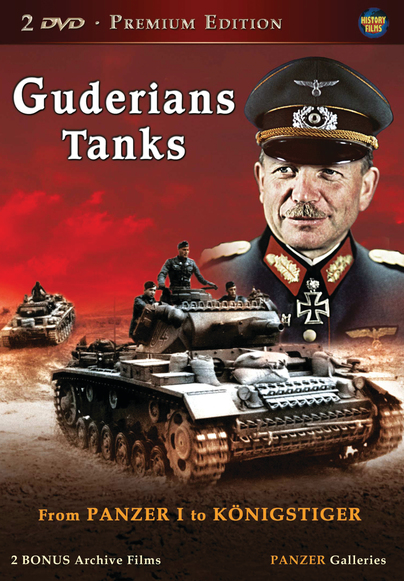 Add to Basket
Add to Wishlist
You'll be £15.39 closer to your next £10.00 credit when you purchase Guderian's Tanks. What's this?
+£4.50 UK Delivery or free UK delivery if order is over £35
(click here for international delivery rates)

Order within the next 6 hours, 58 minutes to get your order processed the next working day!

HEINZ GUDERIAN was the visionary, creator and designer behind many of Germany’s most iconic Tanks. This brilliant strategist developed the attack tactics of the German Tanks Divisions. The key successes in the campaigns against Poland, France, the Balkans and, from 1941/42 in the Soviet Union and North Africa, can be credited to the Panzer troops set up by GUDERIAN.

From Panzer I, the KING TIGER ( TIGER II ) and the PANTHER to the various assault guns, Tank Hunter vehicles and self propelled guns, these are just a small selection of the many fascinating Wehrmacht vehicles that feature in this film.

The military career of General Colonel Heinz Guderian began in the Great War and ended on 29 March 1945, for health reasons. The legendary Tank General was highly respected by all sides for his expertise in the development and construction of tanks and this fascinating DVD shows his tank legacy, using original German archive footage.