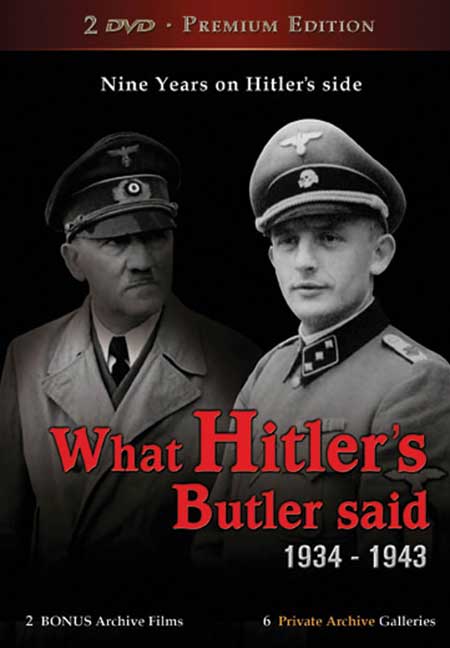 Add to Basket
You'll be £21.99 closer to your next £10.00 credit when you purchase What Hitler's Butler Said. What's this?
+£4 UK Delivery or free UK delivery if order is over £30
(click here for international delivery rates)

Karl Wilhelm Krause is one of the most important witnesses to the history of the Third Reich. Having the title of Hitler's personal valet from 1934-1943 Krause had unparalleled access inside the personal and military life of Hitler, seeing firsthand what happened behind closed doors. His statements and recollections of Hitler his immediate surroundings are a valuable and historically important document of time.

After more than 50 years, Karl Wilhelm Krause broke his silence and finally allowed the historical truth to be told. In this fascinating DVD, Krause reveals many first hand accounts of pivotal moments in Nazi history:

1. Time on the Obersalzberg - Hitler and Krause sneak by security forces and the public without being noticed by the night Munich
2. Polish campaign - Krause as a simple Wehrmacht soldier in the Navy after a quarrel with Hitler
3. Krause's recollections of briefings at the Wolf's Lair

Complete with exclusive interview footage with Krause, as well as original and rare archive footage of Hitler, this DVD lifts the lid on the personal life of Adolf Hitler from one of the men who knew him best.


This is a must see DVD from Pen & Sword Digital.
The overriding impression I got from this fascinating DVD was that Krause believed much of Germany’s second world war history was a result of the wished of the Wehrmacht and not Adolf Hitler.

Some one watching this DVD is free to draw their own conclusions in the same way that a Jury may during a trial. Krause offers some very important insights into Hitler and those around him. This is an absorbing series of interviews and backed by further information in the bonus films and private archive galleries.

Karl Wilhelm Krause served as Adolf Hitler's personal valet from 1934 to 1943, and was, therefore, in a unique position to observe, not just the man himself, but also the inner workings of the Third Reich. The first disc of this volume mixes archive film and photographs with an interview of Krause, in which he vividly describes the man whom he served; his strengths, frailties and peculiarities, as well as the quite unfamiliar human side of the monster. In this respect it is an important historical document as few others were so privileged to have such intimate access to the most notorious man of the 20th Century. The second disc consists of a brief documentary about the life of Hitler, extensive footage of the impressive military parade through Berlin in 1939, as well as numerous photo galleries.