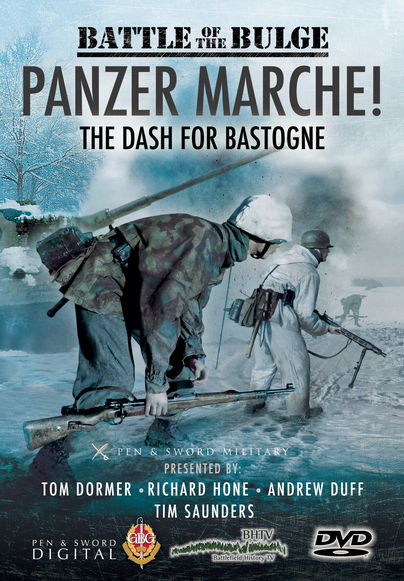 The Dash for Bastogne

Add to Basket
Add to Wishlist
You'll be £12.75 closer to your next £10.00 credit when you purchase Battle of the Bulge: Panzer Marche!. What's this?
+£4.50 UK Delivery or free UK delivery if order is over £35
(click here for international delivery rates)

This is the first of a new series of DVDs that will build into a collection covering all the highlights of this massive and controversial campaign. One that caught the Allies off guard and was fought in terrible weather conditions by some of the best German and Allied troops fighting in the West.

In this section we examine the background to the campaign with a leading American historian before following the advance of one of Hitler's most successful panzer commanders, Hasso von Manteuffel, Fifth Panzer Army. We will travel in wintery conditions from the German border into the lightly held US front line. From the outset small groups of GIs did their best to delay the advance of the panzers, buying time for the vital crossroad town of Bastogne to be reinforced by 101st US Airborne Division. Under the cloak of bad weather, the Germans initially advanced successfully but more slowly than planned However, Germany's chronic lack of fuel hamstrung the advance.

In the usual BHTV style, a selection of the country's most respected and knowledgeable experts take to the fields where the battles were originally fought almost 70 years ago to explain the conflict in meticulous detail.

A big plus of the documentary is that it’s led by questions from the historians. Especially with a subject like this, the viewer will find this very useful. Instead of giving tons of information, asking questions to one another will keep the viewer alert.

Tom Dormer and the crew of Battlefield TV did great job! I’m looking forward to the other documentaries.