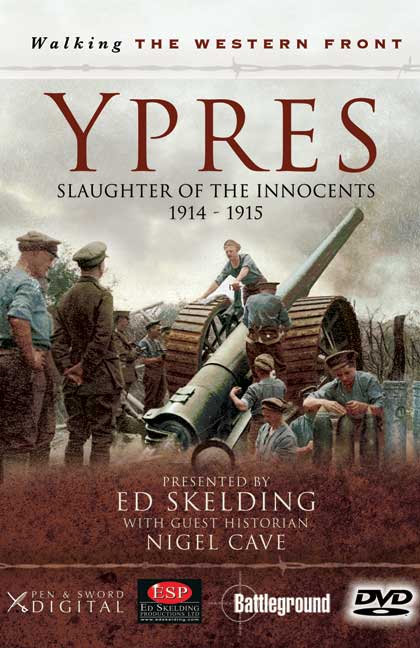 Add to Basket
Add to Wishlist
You'll be £16.99 closer to your next £10.00 credit when you purchase Walking the Western Front: Ypres, Part one. What's this?
+£4.50 UK Delivery or free UK delivery if order is over £40
(click here for international delivery rates)

Ypres – Slaughter OF THE INNOCENTS 1914-1915 is the first in a compelling new series to explore the battlefields of the Western Front during the First World War. For the first time, the whole story of the 'strip of murdered nature' will be told – almost 500 miles from the North Sea to Switzerland.

The aim of this series is to tell the story of the many battles that took place along the Front during more than four years of bitter fighting. This series will take the viewer to the places which have become synonymous with the war – Ypres, Arras, the Somme and Verdun. It will also visit many of the less well known battlefields, telling their story for the first time on film.
Produced and presented by acclaimed film maker Ed Skelding, he is joined by Nigel Cave, the series editor for the Battleground series, to explain the often complex nature of the fighting with extracts from his books.
This film deals with the first and second battles of Ypres, including the opening encounters at Messines Ridge, Gheluvelt and Langemark. It also tells the story of the 1914 Christmas truce and the nearby locations where the artist Bruce Bairnsfather drew the cartoons that were to establish the character of Old Bill.

The second part of this film then switches to the Second Battle of Ypres in April 1915. This became notorious for the first real gas attack of the war and was to change the attitude of the British soldiers towards the Germans. Gone forever was any notion of chivalry. Nigel is interviewed at Vancouver Corner – where an impressive memorial to the Canadians, who died defending the line despite suffering many casualties from the gas, now stands. He also takes us to the nearby Totemuhle or 'Death Windmill' to explain where the gas attack came from and the resulting lost opportunity for the Germans.

The film concludes by paying a visit to Talbot House in Poperinge. Now a living history museum, curator Annelies Vermeulen explains the story behind this fascinating place, where thousands of British soldiers found respite during the war.


Overall it is worth watching, particularly if you are interested in Ypres or this early part of the war, or if you are new to the subject. I look forward to the next release in the series.

The focus of the film is key locations associated with the first two battles of Ypres including Hooge Chateau, Langemark and Gheluvelt.
The tone throughout is relaxed and informal and devoid of excessively dramatic music and reconstructions…very useful guide to the novice and would reward simultaneous use with the appropriate guidebooks from the Battleground Europe series which this disc supplements.

If you are looking for a taster and can see yourself heading on the pilgrimage everyone should make, then this film along with other essential resources, could set you in the right direction.

Most military enthusiasts will recognise the name of Ypres and the epic battles of WW1, and this new 70 minute long DVD from Pen and Sword looks at the actions in some detail, returning to the battlefields to recount those dark days of WW1. It’s a well produced film with modern colour footage intertwined with black and white imagery from the time and offers a fascinating insight into the battles of Ypres. The DVD retails of £16.99 and is available through Pen and Sword. 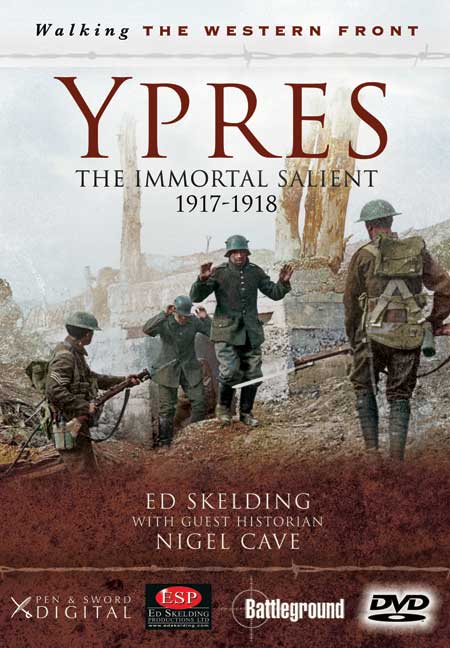 Presenter Ed Skelding is joined once again by military historian and author Nigel Cave to take us through the complexities of the final stages of the fighting for the Ypres Salient. This film starts with the story of the successful attack on Messines and the taking of the ridge and the village. This includes interviews with Nigel at Factory Farm and Spanbroekmolen where two of the nineteen mines were detonated to herald the start the attack early on the morning of the 7th. Nigel will also explain how four of the mines were left undetonated when the line of attack was changed. One of those mines…

Click here to buy both titles for £28.88
More titles by Ed Skelding Productions