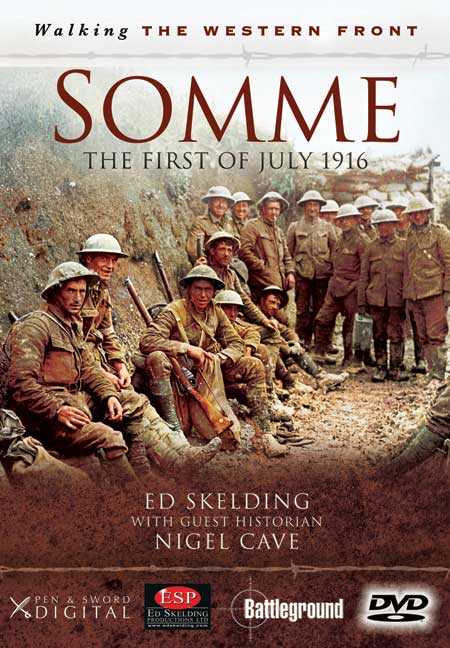 Add to Basket
Add to Wishlist
You'll be £16.99 closer to your next £10.00 credit when you purchase Walking the Western Front - Somme, Part 1. What's this?
+£4.50 UK Delivery or free UK delivery if order is over £35
(click here for international delivery rates)

Following on from the success of the two films on Ypres (Slaughter of the Innocents and The Immortal Salient) The Walking the Western Front series turns its attention to the infamous Battle of the Somme, where almost 60,000 British men were either killed, wounded or classed as missing on the first day alone.

Spread across three seventy-minute DVDs, acclaimed film-maker Ed Skelding and eminent military historian Nigel Cave take us on a tour of the Somme battlefields as they exist today and explain the Battle of the Somme in its entirety, from the opening day offensive where thousands of troops lost their lives against a determined German defence to the abandonment of the operation on 18 November with the final failed Battle of the Ancre.

Relying on their combined knowledge of the battlefields, Ed and Nigel revisit famous places relating to the battle including: Delville Wood, High Wood, Fricourt, Mametz, Guillemont and many more to explain the history behind each offensive, as well as the successes and failures of the Allied armies. The pair also visit a selection of war graves, including the Thiepval Memorial to give the viewer an insight into the scale of loss that the allies suffered during the conflict. Accompanied by a selection of original photographs from the period and exclusive money off vouchers for related books from the Pen and Sword catalogue, these DVDs are the perfect companion for fans of the Battleground series and students of the Great War alike.

A companion book on the Somme will be released by Ed Skelding in late 2013, showing the battle through the eyes of a film-maker and will present original black and white photographs of the battlefield and present day pictures to show how the battlefields have changed over the years.

The First Day of the Battle of the Somme, 1st July 1916, in many ways dominates our popular understanding of the Great War. Eager volunteers walk into machine-gun hell in No Man’s Land with huge losses. But a subject that looks straight forward is far more complex, as a quick read of any book on the 1st July will demonstrate. What can a film on the day tell us?
In contrast to the Mons 1914 DVD I reviewed today, this is a very different film made available by Pen & Sword Digital. It is clear as soon as it starts that this is a film made by someone who understands how television works. It is presented by a professional presenter, which makes a great deal of difference, and the contributors talk well, in a way a general audience will understand. The focus of the film is about the story, with much less about the structure of the army and its units. In this way it presents the material well, with clarity and understanding. The film is well shot and the sound is excellent as well. It will appeal to the WW1 enthusiast of course, but is much more suited to a general public who want to understand more about the First Day of the Battle of the Somme and learn how it may have affected their ancestors.
Highly recommended from me and well worth the £16.99 price.