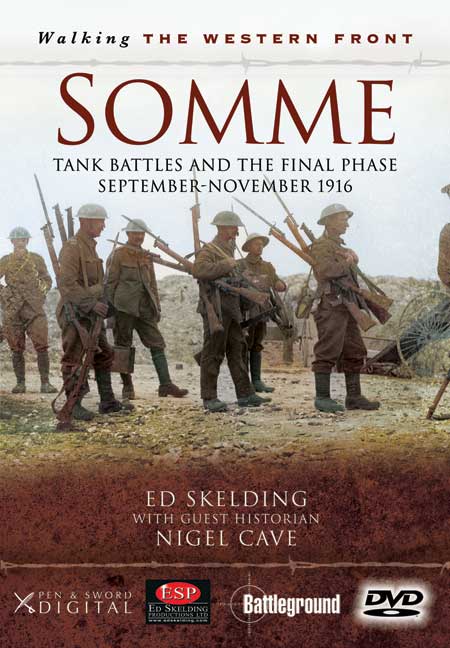 Add to Basket
Add to Wishlist
You'll be £16.99 closer to your next £10.00 credit when you purchase Walking the Western Front - Somme, Part 3. What's this?
+£4.50 UK Delivery or free UK delivery if order is over £35
(click here for international delivery rates)

Following on from the success of the two films on Ypres (Slaughter of the Innocents and The Immortal Salient) The Walking the Western Front series turns its attention to the infamous Battle of the Somme, where almost 60,000 British men were either killed, wounded or classed as missing on the first day alone.

Spread across three seventy-minute DVDs, acclaimed film-maker Ed Skelding and eminent military historian Nigel Cave take us on a tour of the Somme battlefields as they exist today and explain the Battle of the Somme in its entirety, from the opening day offensive where thousands of troops lost their lives against a determined German defence to the abandonment of the operation on 18 November with the final failed Battle of the Ancre.

Relying on their combined knowledge of the battlefields, Ed and Nigel revisit famous places relating to the battle including: Delville Wood, High Wood, Fricourt, Mametz, Guillemont and many more to explain the history behind each offensive, as well as the successes and failures of the Allied armies. The pair also visit a selection of war graves, including the Thiepval Memorial to give the viewer an insight into the scale of loss that the allies suffered during the conflict. Accompanied by a selection of original photographs from the period and exclusive money off vouchers for related books from the Pen and Sword catalogue, these DVDs are the perfect companion for fans of the Battleground series and students of the Great War alike.

A companion book on the Somme will be released by Ed Skelding in late 2013, showing the battle through the eyes of a film-maker and will present original black and white photographs of the battlefield and present day pictures to show how the battlefields have changed over the years.

This third DVD in the ‘Somme’ series concludes the examination of the campaign, focusing on the final two months of fighting. As in the previous films, Ed Skelding acts as presenter with Nigel Cave as the expert on the ground with him.

The format of the previous DVDs is also followed; the two men are on the battlefields visiting key places of interest as Ed provides some general voiceover and quizzes Nigel on the course and conduct of the campaign.

The film opens as the British seek to capitalise on the gains made in two months of bloody fighting by utilising the new invention of tank to break the German line on a 7,000 yard front between Flers and Courcelette on 15th September 1916.

Cave provides a useful introduction to the tank as a weapon, focusing on its limitations and the impact that its use achieved. Whilst the psychological effect on Germans may have been high, in practical terms the nature of the terrain – churned up by over two months of shelling – impeded its overall success.

Cave argues that the tank did not radically change anything at this time. Whilst positive local achievements were made (such as in Flers itself, with the 41st Division), overall its impact was limited, and the development of artillery techniques had more of an effect.

The film progresses chronologically to look at the course of the campaign thereafter, including the Battles of Thiepval ridge, the Ancre Heights, and Le Transloy ridge. Some of thw well known locations on the battlefields are visited, such as the Butte de Warlencourt and the site of the Schwaben Redoubt. There is a brief look at the role of the Royal Flying Corps during the campaign, before moving on to the Battle of the Ancre and the success of the 63rd Naval Division in finally capturing some of the objectives from 1st July, the 51st Division at Beaumont Hamel, and the effective use of the creeping barrage at Redan Ridge.

The narrative is interspersed with personal accounts and also covers other aspects such as the ‘shot at dawn’ executions. The landmarks (such as the memorials and cemeteries) are used as the basis for much of the talking, and the film ends with a brief overall analysis of the campaign and Haig’s command...

... For those with an interest in the Somme campaign, the DVD provides a useful introduction to the latter stages, gives a visual flavour of the landscape and features, and Cave provides a good amount of detail around the course and conduct of the campaign.

An absorbing presentation that does not attempt to inject false excitement, depending on the excitement of real events ably told.