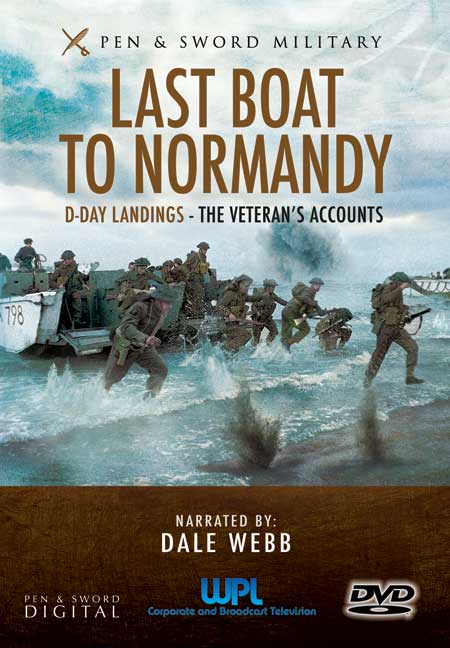 Add to Basket
Add to Wishlist
You'll be £16.99 closer to your next £10.00 credit when you purchase Last Boat To Normandy. What's this?
+£4.50 UK Delivery or free UK delivery if order is over £35
(click here for international delivery rates)

‘Last Boat to Normandy’ takes a quiet, dignified trip to France with a small number of selected veterans, in order that they can pay their respects once more. In doing so, they share with us the memories, nightmares and stories which have remained with them ever since that famous day in 1944.

Our camera crew will be travelling with a group of veterans from the North of England, as they visit those same spots where they risked their lives six decades ago, and where they lost so many of their fellow countrymen.

They’ll be meeting up with old comrades, and old adversaries, to look back together at what happened, and how it changed the world as we know it. They’ll share with each other the tales of bravery, danger and contant threat which marked that campaign.

The film looks at who did what, and asks them to explain in their own words why they did what they did.

From personal accounts of fear and chaos, through to uplifting stories of brotherhood forged in adversity. This is the real story behind the organised services, and the pilgrimages made to attend them.

This is the D-Day Landings....in their own words.


“It is a moving recording with the memories of these old soldiers, sailors and airmen as fresh and vivid to them now as the experiences were in 1944. The veterans making a last crossing in commemoration are a very representative cross section of the personnel who took part in D-Day. Their collected accounts provide a unique and valuable picture seen through the eyes of those participated. There is no academic interpretation to dilute the accounts and this record will provide first hand knowledge to later generations. This is a great tribute to the courage of all those who took part in D-Day. A great value DVD filled with pride, modesty, emotion, comradeship.”

This moving DVD follows a group veterans in their 80s and 90s as they travel by ferry from Portsmouth to revisity sites such as Pegasus Bridge, meeting old comrades and sharing their experiences along the way. The result is a mixture of travelogue and oral history, deservedly preserved on film by pen and Sword. The veterans relive the past with dignity, courage and indeed humour in this one-hour film. The warm welcome they receive from the people of Normandy speaks volumes. A wonderful watch for any history enthusiast

This DVD follows a group of veterans, including a large number who served with the 6th Airborne Division, making what may well be their final pilgrimage to the battlefields of Normandy. Each gives a vivid, sobering and gripping account of his experiences on the 6th June 1944.

Utterly compelling - the dignity of the men who took part in the Normandy landings has to be seen to be believed, and their actions during those fateful times must never be forgotten. This is one way of remembering them. Superb quality footage.