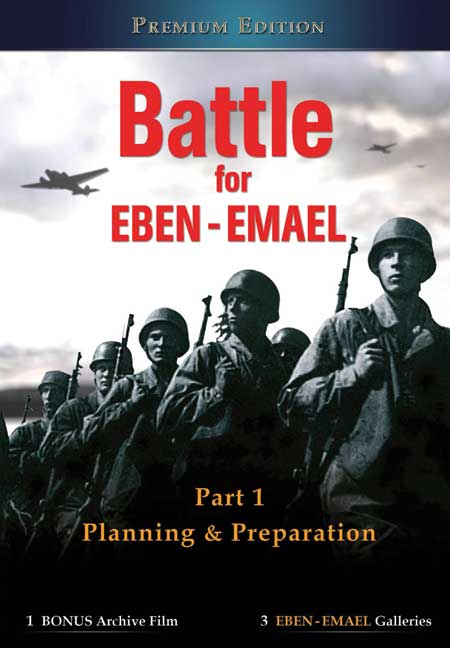 Add to Basket
Add to Wishlist
You'll be £16.99 closer to your next £10.00 credit when you purchase Battle for Eben-Emael. What's this?
+£4.50 UK Delivery or free UK delivery if order is over £35
(click here for international delivery rates)

Ten minutes before the start of the Western campaign on 10 May 1940 a specially selected Division of paratroopers took to the air to execute a strategically vital special mission: a coup-like seizure of the bridges over the Albert Canal, west of Maastricht and of the heavy weapons of Eben Emael. Constructed in 1931–1935, Fort Eben Emael was reputed to be impregnable and, at the time, the largest military fortress in the world.

On 10 May 1940, 78 paratroopers of the German 7th Flieger (later 1st Fallschirmjäger Division) landed on the fortress with gliders (type DFS 230), armed with special high explosives to attack the fortress and its guns. Most of the fort's defences were lightly manned and taken by complete surprise. Much of the fort's defensive armament was destroyed in a few minutes. The attackers were unable to penetrate inside the underground galleries, but the garrison was unable to dislodge them from the surface of the fort. The fortress surrendered one day later, when the German paratroopers were reinforced by the German 151st Infantry Regiment. While 1200 soldiers were authorized to be at the fort on any given day, only 650 were at the fort with an additional 233 soldiers 6 km away at the time of the German assault.

This first part in a three part mini series on the Eben Emael attack describes the precise planning and preparation for this deployment, as well as a detailed schedule of the fighting. The DVD explains the initial phase of the attack through the use of rare and original German documentary footage. Added to this is a selection of descriptions of the battle by witnesses of both sides creating an impressive and accurate portrayal of this iconic military operation.

This first part in the series on the Eben Emael attack describes the precise planning and preparation for this operation, as well as a detailed breakdown and schedule of field tactics and combat. This is a very interesting and well-balanced account of one of the major operations of World War II superbly condensed to DVD. Recommended.

The fact that this DVD leaves you waiting patiently for part 2 shows that it is both interesting and entertaining. Well worth an hour of the time of all those with an interest in WW2.

This is another German production and makes use of wartime archive film much of which has not previously been seen since 1945. This DVD is an introduction that covers the formation of the German parachute troops and their training for this critical action in 1940.