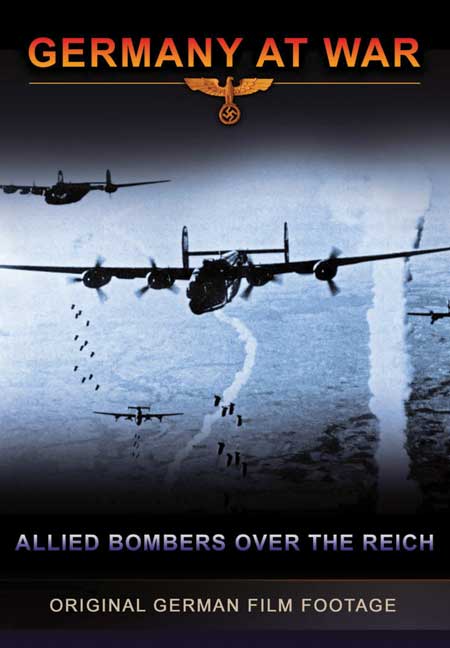 Germany At War - Allied Bombers Over the Reich DVD (DVD)

Add to Basket
Add to Wishlist
You'll be £14.99 closer to your next £10.00 credit when you purchase Germany At War - Allied Bombers Over the Reich DVD. What's this?
+£4.50 UK Delivery or free UK delivery if order is over £35
(click here for international delivery rates)

Before the Second World War, the technology linked with aeroplanes was still very much in its infancy. As the thirties reached their conclusion, the increasing probability of war meant that there was an increased surge in the development of aircraft to provide an additional form of warfare to both sides. In July 1936, these advances in technology were being put to the test by Hitler during the Spanish Civil War, where the Germans aided the nationalists and honed their Blitzkrieg attacks. However, the Second World War saw the first large scale aerial battles in the history of warfare, with all nations relying heavily on the aeroplane.

Even though the risk from enemy bombers was expected on most large towns and cities throughout Western Europe, the defence against such attacks were extremely poor. It was almost impossible to believe that the long range Bombers would cause such devastation. Anti-aircraft guns and barrage balloons were still very much in their infancy and their successes against enemy aircraft was limited. It wasn't until the latter years of the war that truly efficient countermeasure were introduced.

These two films contain over fifty minutes of captivating footage on air warfare, ranging from the mass dogfights between allied and enemy fighter planes in the skies to the impressive anti-aircraft defence units found in towns and cities. These Flak guns were often massive pieces of machinery that could bombard enemy planes with shells, with the German 88 becoming one of the most famous and lethal AA guns in history.

The extraordinary battles in the skies between fighters and bombers are documented using original footage from onboard cameras, excerpts of which have only recently been discovered and have never been seen before.

… there is some very interesting film of aerial bombardment. It is also interesting to compare the perception of the 1939-45 air war in German and Allied eyes. The ethics and results of mass bombing will be debated into the future, but this DVD shows it being carried out. A powerful and absorbing DVD.