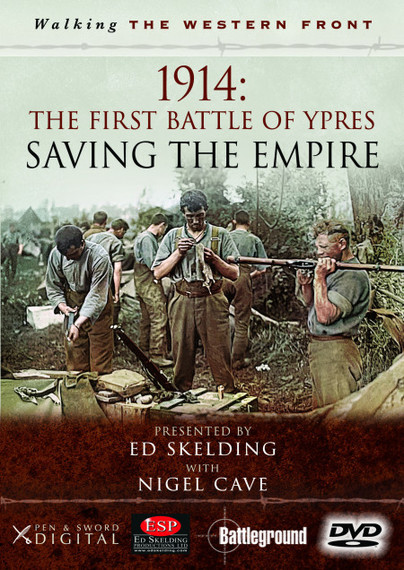 Walking the Western Front 1914: The First Battle of Ypres (DVD)

Preorder
Add to Wishlist
You'll be £13.59 closer to your next £10.00 credit when you purchase Walking the Western Front 1914: The First Battle of Ypres. What's this?
+£4.50 UK Delivery or free UK delivery if order is over £35
(click here for international delivery rates)

In this second volume telling the story of the First Battle of Ypres, filmmaker Ed Skelding and military historian Nigel Cave now turn their attention to the crucial stages of the battle as the soldiers of the British Expeditionary Force faced their German adversaries, often with odds of seven to one against. It was a daunting prospect, but one that the British regulars, referred to by the Kaiser as the ‘contemptibly little army’, would prove themselves up to the task.

31 October was to be a pivotal day in the battle with two major encounters between the opposing armies.

The Messines Ridge was a major objective for the Germans; its capture would give them a commanding view of Ypres to the north. It was here on the 31st that the first territorial soldiers saw action as the London Scottish went into the line early that morning. As elsewhere along the front that day, the British found themselves heavily outnumbered, yet somehow managed to hold their line.

A short distance to the north, the village of Gheluvelt was to be the location for one of the most decisive actions of the battle if not the entire war. As the massed German formations advanced along the Menin Road towards Ypres, it looked likely that the battle to save the town might be lost. As the Germans began to break through the British line they occupied the château at Gheluvelt to regroup. It was at that moment that the Worcesters launched a surprise attack, routing the enemy and saving the day. It was said that their efforts saved not just the day but ‘saved the Empire’.

Both of these actions are described in detail in this film as are the other major events that would see the battle draw to a close. It had been bitterly fought at great cost to the British, who suffered some 58,000 casualties. While the losses were hard to bear, the result was that the German Army was halted at Ypres for the rest of the war.