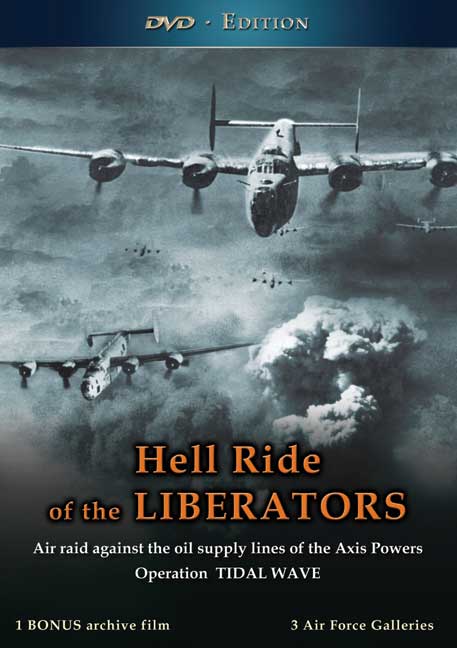 Air Raid Against the Oil Supply Lines of the Axis Powers

Add to Basket
Add to Wishlist
You'll be £14.99 closer to your next £10.00 credit when you purchase Hell Ride of the Liberators DVD. What's this?
+£4.50 UK Delivery or free UK delivery if order is over £35
(click here for international delivery rates)

On the 1st August 1943, a massive American airborne operation was about to embark on a vital mission which, if successful, would tip the balance of the Second World War in the Allies favour. Code named Operation Tidal Wave, a total of 174 four engined B-24 Bombers took off in five groups for the mission. Their target was the Romanian oil fields at Ploiesti, a destination that lay deep within enemy lines. Their task; to disrupt the production of nine of the main oil fields or, if possible, destroy them completely. The attack on this pivotal military goal called for a classic use of long-range bombers and there were none more fitting than the B-24.

The glorious B-24 bomber shared many similarities with its better known sister aircraft: the B-17 Flying Fortress. However, the B-24 had a number of significant upgrades including a more modern design, heavier bomb load and faster top speed. 70 years on, this formidable aircraft still carries the accolade as the most produced Allied heavy bomber in history, with over 18,000 produced.

Unfortunately the U.S. Secret Service had mistakenly reported that the defences positioned around the oil fields were extremely weak, defended “only by Romanians” and would pose little to no threat to the approaching American forces. In fact, some 50,000 German soldiers stood ready to repel any attack with a massive bombardment. The fortifications around Ploiesti were widely covered by German Flak cannons. In addition to this, an entire fighter squadron of Bf-109s (Me 109) was stationed there, ready to intercept any aircraft that tried to breech the fortifications.

The battle that ensued resulted in the worst loss of life ever suffered by the US air forces on a single mission, with a total of 660 aircrewmen killed and 53 aircraft destroyed; almost a third of the entire group. The mission was a total failure and caused no no disruption to the German oil output. This military DVD analyses this catastrophic raid and explains exactly what went wrong using original and rare archive film. Complete with a collection of additional footage and pictures, this DVD documents the raid in prolific detail and will appeal to all aviation enthusiasts.

The entire sequence of events is all explained with combat film from the raid itself, where possible