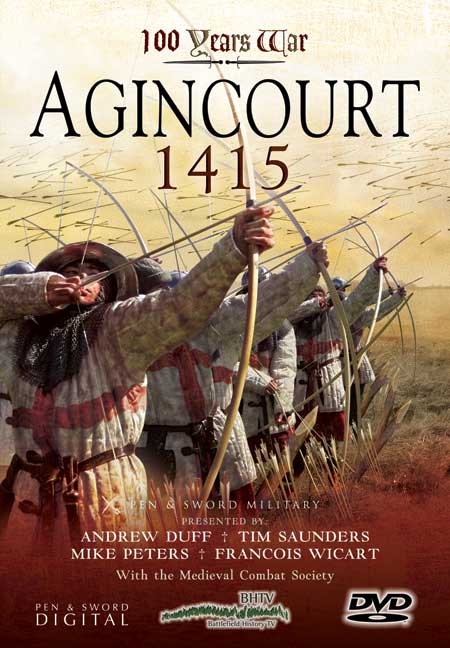 On the 25th October 1415 Henry Vs small and dispirited Anglo/Welsh Army destroyed a vast French Army at Azincourt. This programme looks at not just this iconic battle immortalised by Shakespeare and many other authors but the campaign that led up to this final great English victory of the 100 Years War when the Yeoman of England reigned supreme on the field of battle.

Unlike the Crecy campaign of his great grandfather Edward III this campaign nearly ended in disaster. England had been weakened by civil war and plague. Henry's English Army did not have the experience and leadership of that of his great grandfather however it despite its weaknesses it still was to prove superior to the over proud French Army riven with jealousy and pride. Although the initial landings and encirclement of Harfleur went well the siege dragged on and the “Bloody Flux” the scourge of many a medieval army struck the English. Although they successfully captured Harfleur the army that was left was a shadow of its former self. Henry's attempts to march to Calais were beset with problems as the French Army stalked him aiming to bring him to battle and destroy him and his socially inferior army.

Once again the English victory on the field of Agincourt was a demonstration of the French genetic ability to snatch defeat from the jaws of victory. As at Crecy the courage, discipline and steadfastness of the mainly yeoman Anglo/Welsh aided by the use of the longbow turned the massive and magnificent French Army, into a bloody ruin.

This victory would allow him to achieve his political aim, however it was only Henry's early death in 1422 which stopped the English in uniting England and France under an English King.
In this programme, the BHTV team use their experience as soldiers and guides to bring this iconic campaign to life. The team examines the political, military and economic background to the campaign and brings the subject to life by visits to all the major locations, skilful use of maps and complimented by re-enactment footage and vignettes of life and combat in 1415

Verbal explanations, given by people who clearly know their subject, are mostly presented before a background of the sites as they are today. There are maps, and film of re-enactors from the Medieval Combat Society playing out some aspects of fifteenth century combat, especially arrows against armour, which really bring the story to life.
We recommend this DVD as being both informative and entertaining.

Using a mix of presenters, all historians and battlefield guides, and including a French historian as well to give some balance to the story. A number of re-enactors are used and explanations of the clothing and armour worn by the British army. Even the details of the various types of arrows used by the English archers is given along with part of the story being told by the team on the battlefield itself. It explores the detail of the battle, as can best be established, and will make a program well worth watching if you are considering a visit to the battlefield itself. It is only about an hour's drive south of the Eurotunnel, and makes for an interesting trip. Some of the film shows in the background the brightly painted 2D coloured figures that are used as permanent reminders of the battle in the pretty village of Azincourt, and on the battlefield itself.

As with other DVDs from BHTV, the viewer can feel part of the story and relate to the enthusiasm of presenters who have a great enthusiasm for their subject, a lifetime of related experience, and an ability to present in a fluid and understandable manner. Yet another great BHTV exposure of one of the great battles of history.