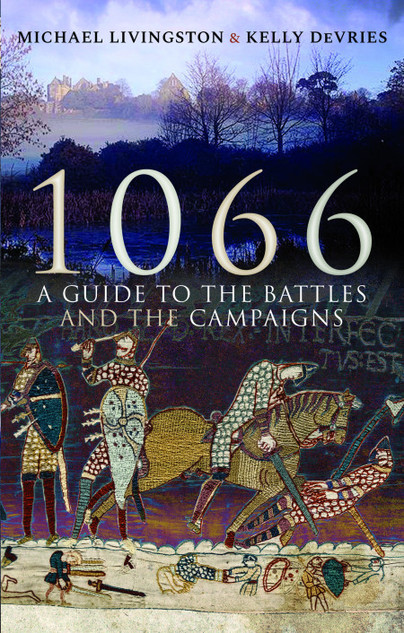 A Guide to the Battles and the Campaigns

The Battle of Hastings, fought on 14 October 1066, changed the course of English history. This most famous moment of the Norman Conquest was recorded in graphic detail in the threads of the Bayeux Tapestry, providing a priceless glimpse into a brutal conflict.

In this fresh look at the battle and its surrounding campaigns, leading medieval military historians Michael Livingston and Kelly DeVries combine the imagery of the tapestry with the latest modern investigative research to reveal the story of Hastings as it has never been told and guide visitors around the battlefield today.

This absorbing new account of the battle will be fascinating reading for anyone keen to find out what really happened in 1066: the journeys by which Harold Godwinson and William of Normandy came to the battlefield, and the latest reconstructions of the course of the fighting on that momentous day. It is also a practical, easy-to-use guide for visitors to the sites associated with the conquest as well as the Hastings battlefield itself.

Well researched and written this is a must read for anyone interested in 1066 and the aftermath.

“The writing is concise, with many side bars to identify people, explain technical terms, and so forth, and each chapter ends with a recommended tour route. A very good book for anyone who knows little about the conquest, and one which even those well up on the subject may find interesting.”

An excellent guidebook to the Battle of Hastings.

The subject covers an area of land and sea which has changed so much since 1066. The sea is now some two miles away from Pevensey Castle where William landed his fleet and this phenomenon is explained away as caused by strong tides and longshore drift; yes in part - but the main reason is seismic underground movement in the English Channel which raised both Romney Marsh and Pevensey Levels - where I live. The book's explanation of the progress of William's invasion force is also uncertain, believing that William moved his army by boat from Pevensey to Battle across a tidal and shallow bay; I tend to agree with local historians that he marched them there while burning and plundering local villages. The only other query which remains unresolved relates to the actual location of the battlefield. The scene surveyed by modern visitors make sense, it leads from high ground into a valley where the Normans allegedly drew up their battle lines before battle commenced, with Harold's army holding the high ground. Yet the ground has never been touched or farmed and no relics of a battle have ever been found. Electronic surveillance has also drawn a blank. Modern belief based of the finding of actual relics is a half-mile to the east on land now built on with a major road junction and roundabout - perhaps we'll never know.

Otherwise, the account is the best I have read; it is a superb overview of that dramatic year, in which England had four kings. It explains the complicated process of the politics of the time and how William believed he was the rightful King of England with Harold the usurper.

I learned much from this account which clarified the sequence of events leading to the Norman invasion and it also explores the post invasion period. The text is accompanied by excellent photographs.

I enjoyed the book and I commend it to anyone interested in this momentous year and the last successful invasion of England.

1066 was truly the year that changed history in England, and this book takes a fresh look at the battles, giving the reader a deeper look into the campaigns.

With the tides turning, there is a lot of information that can easily feel overwhelming, but the authors take and break it down to where anyone, regardless of their knowledge of 1066 can understand and appreciate. If you appreciate history, and military maneuvers, then you are going to love this take on the campaigns that brought England a new king, and gave birth to a tapestry that is still talked about! Dive into the Bayeux Tapestry, the battles, and the men who fought the campaigns of 1066.

Perfect for a weekend read!

Followers of Bernard Cornwell's Dark Ages series, The Last Kingdom, will be absolutely fascinated by Michael and Kelly's book, which fast forwards just a few years to the conquest of England by the Normans. Superbly illustrated.

Gripping presentation of the persona of William, the pivotal Battle of Hastings, the geopolitical situation, ambitions and interests of 11th-century Anglo-Saxons, the bases and development of England as the world power for centuries to go, military history, history of normans.
I have to admit this was my first entry to the subject and as far as I see, there are many books on the subject, however, for a person, who is fairly acquainted with medieval world history, yet not too familiar with Anglo-Saxon history, this work is a great starting point and base to get an understanding, background powers, pivotal moments, as well as all the references to future victories and global visions.

The book is a very useful compendium of perhaps more scientific books that analyze in depth situations and characters of that 1066. However, I believe that as a guide it is unbeatable in bringing the historian, the enthusiast or the simple curious on the trail of an event that changed the history of England and which consequently also changed that of the world.

The book is also lavishly illustrated with colour photographs of locations, and it almost goes without saying that scenes from the Bayeux Tapestry are sprinkled throughout the text. All in all, this is an excellent little primer on 1066 and a first-class resource for those that want to follow in the footsteps of the victor and the vanquished.

Good book to read before you go for a visit to view the sites of the battle, it'll also give you info you may forget after reading a more comprehensive book of events. Well researched. Kudos authors!

This book gives an overview of the 3 battle events of 1066 Fulford gate, Stamford bridge and Hastings and you don't really have to be a historian to understand the book as its written in language which can be understood by a lay person. the book lays out events and history leading to 1066 as well.

A well researched and easy to read entry into the period immediately before, during and after the Norman Invasion of England in 1066.

Written so that even someone with no knowledge of events can follow with ease, Livingston and DeVries provide ample information without overwhelming the reader with a vast amount of information. What they do provide is an analysis of the events, battles and key players, whilst using separate text boxes for other key subject matters (ie: weapons, armies, tactics, etc). Each chapter includes or is finished with what the authors term as a "tour" of places and structures pivotal to the events.

Definitely a book to be considered as a primer or introductory text for the Norman Invasion of 1066.

An exceptional retelling of a pivotal moment in history. Incredibly well researched, the authors offer new information and insights even to those who are familiar with the Battle of Hastings. The writing itself is clear and accessible to any reader with an interest, avoiding academic pretensions which sometimes come with very focused history books.

This book succeeds in conjoining the context for the major battles of 1066. It articulates these events not as separate but as part of a continuing series of power plays by those who wanted the riches of England; a process that had been ongoing after the settlement of the Saxons and other Germanic tribes in the vacuum left by Rome. It is an ideal companion to be slipped into a pocket on site. Good maps, good images and clear narrative. Personally, I would have liked a deeper discussion on the merits of alternative battle sites at Hastings, particularly Caldbec Hill, but that is probably best left for a more focused book. Overall a fine introduction to the 1066 campaigns.

Kelly DeVries is Professor of History at Loyola University Maryland, an Honorary Consultant to the Royal Armouries, and author of many books on medieval military history including Medieval Military Technology, Infantry Warfare in the Early Fourteenth Century, and Joan of Arc: A Military Leader.

Michael Livingston is Professor of English at The Citadel, The Military College of South Carolina, and author of scholarly books including Siege of Jerusalem, Owain Glyndwr: A Casebook and The Battle of Brunanburh: A Casebook. He is also a historical novelist.