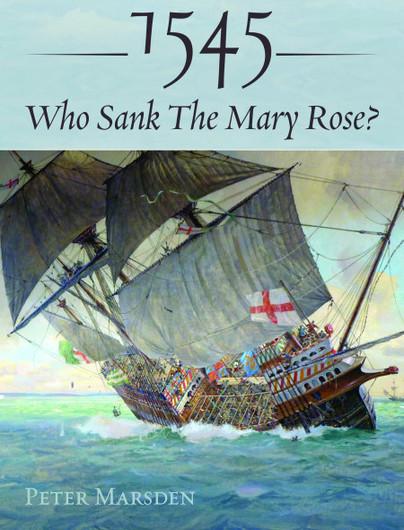 As featured by The Guardian: Triple-decker: how the Mary Rose had room for 500 men

The raising of the Mary Rose in 1982 was a remarkable feat of archaeology and her subsequent preservation and display at Portsmouth a triumph of technical skill and imagination. She is more than a relic, however. She has a story to tell, and her sinking in the Solent in 1545, when under attack by the French, and the reasons for it, have intrigued historians for generations. With the benefit of access to her remains, archaeologists have been able to slowly unravel the mystery of her foundering on a calm summer’s day in July 1545.

This new book by one of the country’s leading experts on the Mary Rose contains much that is published for the first time. It has the first full account of the battle in which Henry VIII’s warship was sunk, and tells the stories of the English and French admirals. It examines the design and construction of the ship and how she was used, and develops themes begun when he was earlier commissioned by the Mary Rose Trust to write the multi-volume history of the ship. He shows for the first time conclusively that the French fleet arrived unexpectedly to seize the Isle of Wight and Portsmouth a day later than was once believed, that the many bodies found in the wreck reflect her at action stations, and that the ship had had an extra deck added and was therefore more unstable than was previously thought. Finally, the author makes it clear who was responsible for the loss of the Mary Rose, after describing what happened onboard, deck by deck, in her last moments afloat.

The fascinating revelation will intrigue the general reader as well as the historian and archaeologist and the book is set to become the last word on the career of this most famous of ships.

This is a great read for anyone with an interest in Tudor history or naval history. It’s a really interesting subject and one which deserves more to be written about it.

With detailed reconstruction of its structure set out over 300-plus glossy pages full of pictures of historical artefacts, this re-telling of the story of a much-loved warship will entice Naval experts and lay historians alike.

His [Peter Marsden] book is not only a well-written and compelling read, it is also superbly and comprehensively illustrated, an added bonus. Highly recommended.

Marsden's book is highly recommendable, especially for all those who know Mary Rose’s history already and want to know more; those who have already read the monographs published in 2009 by the "Mary Rose Trust" can find new and interesting information in a book that demonstrates how rescuing wrecks of great ships of the past can help to a substantial extent to understand many aspects of their building technique as well as crew living conditions.

Use of glossy paper enhances the many color illustrations and diagrams found throughout the book. A very readable text is enriched with end notes, a bibliography, and two appendices, one on the ship’s components and another on the locations and conditions of crewmembers who went down with the vessel.

There is a wealth of knowledge in this book from building wooden warships, early sea battles, European history and archaeology to naval administration and anatomy. Together they tell a fascinating story of one special ship and the crew that manned her.

"1545: Who Sank the Mary Rose" is a fascinating glimpse into the past and I highly recommend it to everyone interested in this time period. It may be a wonderful companion if you're visiting the Mary Rose Museum in Portsmouth where the remains of the ship and its artefacts are on display.

Marsden has written a masterpiece that explores this remarkable vessel. He is scrupulous in the details that will delight experts and novices of nautical archeology alike, yet his writing style makes you feel like you are watching a movie. This book is an absolute triumph and it brings a fresh perspective into the sinking of Henry VIII’s flagship. If you are interested in learning more about the story of this remarkable ship and the Tudor navy, I highly recommend you read Peter Marsden’s book, “1545: Who Sank The Mary Rose?”

The story of the discovery and eventual raising of the Tudor warship Mary Rose has been told a number of times but the story of how she really sank was only possible after the conservation of the hull ashore. The skeletons and artefacts recovered during the conservation have provided a wealth of information not just about the warship, but about her crew and the Royal Navy of the Tudor period – Most Highly Recommended.

The book in the title asks a question, and the author will also answer that question, to which I cannot answer in order not to reveal too much. All you have to do is use this book as a time machine and go back to those final hours on July 19th 1545, you won't regret it.

A fascinating account of the career and demise of this most famous of ships.

Article: 'Final moments of Tudor ship' as featured by

Article: 'Final moments of Tudor ship revealed' as featured by

A new book shows how, to house its massive crew, Henry VIII’s favourite warship had one more deck than was originally thought.

DR PETER MARSDEN is a professional archaeologist who has excavated numerous Roman, medieval and later sites. He was commissioned to record the Bronze Age (c.1550 BC) boat at Dover, and has excavated the oldest seagoing sailing ship found in northern Europe (of c.150 AD), as well as other Roman and medieval shipwrecks in the River Thames. He is a founder of the Council for Nautical Archaeology that successfully campaigned for a law to protect historic shipwrecks (Protection of Wrecks Act 1973), and in 1986 created the Shipwreck Museum at Hastings in East Sussex. He is a Fellow of the Society of Antiquaries. While doing all of this he was commissioned by the Mary Rose Trust to compile two of the five major academic volumes about Mary Rose.