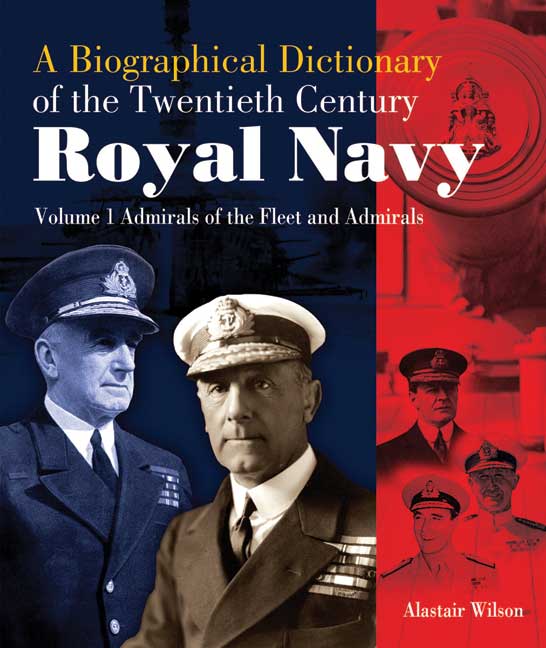 A Biographical Dictionary of the Twentieth-Century Royal Navy (Hardback)

Volume 1 - Admirals of the Fleet and Admirals

Add to Basket
Add to Wishlist
You'll be £22.50 closer to your next £10.00 credit when you purchase A Biographical Dictionary of the Twentieth-Century Royal Navy. What's this?
+£4.50 UK Delivery or free UK delivery if order is over £35
(click here for international delivery rates)

Order within the next 7 hours, 33 minutes to get your order processed the next working day!

Despite its recent decline in size and influence, for much of the twentieth century the Royal Navy was a major player in world history. Its senior officers carried out – and sometimes made – British policy in peace and war, but with the exception of a few star figures the details of their careers have never been published. This book is the first volume of a major study intended to provide a resumé of the service lives of every flag officer, in the style of the great nineteenth century biographical dictionaries of Marshall and O'Byrne. Every entry is based on primary sources, including the Navy's confidential personnel files, cross-referenced with general historical data and, in the case of living officers, correspondence with the subjects themselves.

The book comes with a CD which contains the service histories and careers of 336 most senior admirals on the Navy List from 1900 onwards. The length of each entry varies with the importance of the officer covered, but each includes both an outline of their careers and significant dates, like promotions and awards. In all, the CD contains more than 600,000 words - a truly epic work. The majority are not even included in the Dictionary of National Biography, and as such, this work will be a boon to historians, and invaluable to genealogists. A monumental and unique naval historical resource.

This is a very useful reference work in its own right – it'll certainly be of great use for me as I try and track down some of the more obscure wartime admirals – and the complete series will be a very impressive achievement.

The book opens with the social-historical background which includes a lucid and valuable explanation on how entry, promotion, half-pay and retirement of naval officers worked, and changed over time during the period.... This is not the sort of work one would read straight off as one would a novel, but it is an absolutely key resource for anyone researching the RN at a command level in the twentieth century; in this way the author has done a considerable service to posterity. It will also provide interest, and perhaps amusement, to those who served with those included. It is an important work of naval history in its own right.

An impressive piece of research. For those interested in naval genealogy, this volume and the other in preparation will be invaluable.

A tremendous achievement, reflecting sustained application, rich insight and a sense of the significance of the subject. It should be on the shelf of any historian of twentieth-century British defence and strategy.
Once completed the series will be the standard Royal Navy biographical reference for the century, and 'Wilson ABD' will become a standard footnote reference.

The work involved in this impressive dictionary and its counterparts must have been Herculean, and it would be an essential purchase for any library with a serious interest in naval history.

Will appeal to naval historians, genealogists and any serious student of twentieth century naval history

[This] series will undoubtedly be the definitive Royal Navy biographical reference for some considerable time and as such will appeal to the dedicated naval researcher.

A most useful addition to the bookshelf and therefore recommended to all students of British naval history.

Promises to be a work of reference which will be consulted for many years to come.

Intended for amateur genealogists as much as for naval historians.

Wilson uses sources that would be denied to others, having privileged access to the Royal Navy's service records and personal communication with many living admirals...If you have an ancestor who was an admiral, or are researching an ancestor's commanding office, you'll value the level of detail here.

A remarkable achievement of research an compilation…the starting point for anyone who wants to obtain a reference for the most senior officers of the Royal Navy in the last eventful century. No naval library is complete without it. One looks forward to future volumes with anticipation and increasing admiration for the author.

A truly epic work, will be an essential reference for historians and genealogists alike.

A retired naval officer, ALASTAIR WILSON has worked for nearly a decade compiling, checking and editing the records that form the basis for this project.