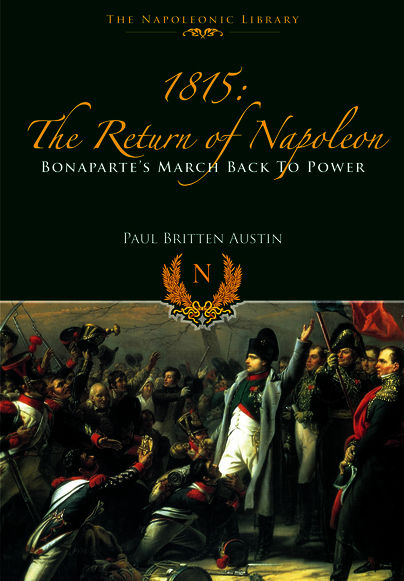 Add to Basket
Add to Wishlist
You'll be £18.75 closer to your next £10.00 credit when you purchase 1815: The Return of Napoleon. What's this?
+£4.50 UK Delivery or free UK delivery if order is over £35
(click here for international delivery rates)

This book covers the first part of Napoleon's return from Elba in 1815,the beginning of "The Hundred Days". This book uses eyewitnesses and participants accounts, and often quote their own words on the events. The same tecnique as the author used in his triology on the Invasion of Russia in 1812.
This book gave me an insight on the period from Napoleon landed in France until he was safe in Paris, that I have never experienced in other books on the topic. Most books cover this period of "The Hundred Days" rather quickly, so they can get to the main event, The Battle of Waterloo. Here we follow Napoleon from his landing in the south of France all the way to Paris. We are also told how Paris react to news of the landing, and how the statesmen, soldiers and ordinary people reacted on Napoleon's return.

To summarize, I think it is a very good book on an interesting period in history, and I look forward to the next book, covering the rest of "The Hundred Days".

In this book, first published in 2002, and
sub-titled Bonaparte’s March Back to Power, the author draws on hundreds of first-hand accounts by Napoleon’s supporters and opponents, to provide the reader with the French view on onset of the Waterloo campaign. Napoleon’s landing at Antibes in March 1815, the first heady days of his arrival after a year in exile; his march up through France and the arrival in Paris are all covered. The book forms an interesting pre-cursor to the Hundred Days. In all 27 monochrome illustrations support the text and there are five maps.

Considering the enormous amount of attention the Waterloo campaign has received in print, it's surprising that the events preceding the campaign have been practically ignored by English-language authors. Military historians may be deterred by the fact that Napoleon's return to power was a practically bloodless affair however, it certainly wasn't without drama as shown by Paul Britten Austin in this well-written work, reissued under the Frontline Books imprint. From the first day of the "adventure", where the situation at Antibes threatened to degenerate into farce, to the arduous trek through the mountains to Grenoble, to the march on Paris in the face of the royalist army's attempt to concentrate in defence of the capital, the outcome was far from a foregone conclusion.

The first chapter describes the landing at Antibes however, this isn't where the story begins, and so the second chapter describes Napoleon's time on Elba in a type of flashback style. The reasons for the return to France, the decision to do so and the subsequent preparations are described. The narrative is written in the present tense which is unusual nonetheless, this adds an extra dynamic to the account.

The book is very well researched, as witnessed by the extensive notes and also well written. This version is a high quality hardback with dust cover and includes five maps and twenty-seven black-and-white illustrations.