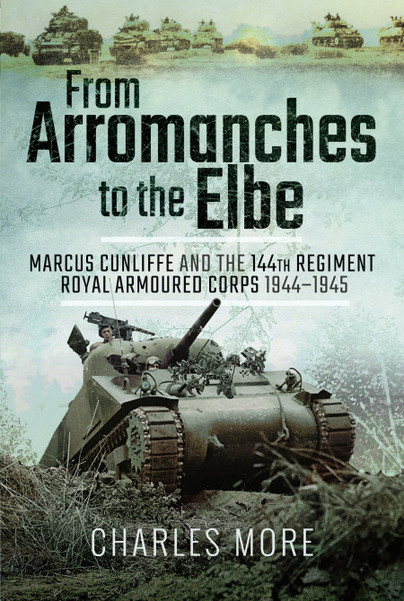 From Arromanches to the Elbe (ePub)

Click here for help on how to download our eBooks
Add to Basket
Add to Wishlist
You'll be £4.99 closer to your next £10.00 credit when you purchase From Arromanches to the Elbe. What's this?
Need a currency converter? Check XE.com for live rates

It was on 14 June 1944, D+8, that the tanks of the 144th Regiment Royal Armoured Corps began to disembark on Gold Beach as part of the Normandy landings. The men of the 144th soon found themselves in action – the start of a long and bitter campaign that would take them across North West Europe into the heart of Germany.

During that advance the regiment took part in a number of important actions. These included Operation Pomegranate (July 1944), Operation Totalize, an innovative Canadian-led night attack which was one of the final steps to breaking out of the Caen bridgehead (August 1944), the siege and capture of Le Havre and the fighting in Holland during late 1944. The regiment helped to push back the last big German offensive in the Ardennes – one of the few British units involved – and was then the first British unit to cross the Rhine. By this time it was equipped with amphibious Buffaloes, and one carried the flag which had accompanied the first British tanks to cross the Rhine after the end of the First World War. Just before the end of the war in Europe the regiment helped British troops capture Bremen, and American troops cross the Elbe.

The author began to investigate the regiment’s service through his late father-in-law, Captain R.W. Thorne, who had been an officer in it during the war. As well as extensive interviews with him about the regiment and the campaign, this book draws on a variety of contemporary sources – not least of which are the archives of fellow officer Marcus Cunliffe.

Cunliffe, who went on to become a distinguished British scholar and author specializing in American Studies (particularly military and cultural history), had kept a detailed and graphic diary and written a number of lively and informative accounts – all of which are now in the George Washington University in Washington DC. Unsurprisingly, Cunliffe’s work features heavily in this publication.

Arromanches to the Elbe is a serious contribution to the history of the Second World War. As well as exploring all aspects of army life, such as training and what might be called the social history of an active service unit, this book will appeal to those interested in the campaign in Europe as a whole, the use of tanks and armoured warfare in general, and, of course, the final battles to defeat Hitler’s Third Reich.


The absolute most interesting aspect of this book is the eye witness reports, and OPINIONS, written about not only the fighting activity, but about the day to day life in the regiment. It tells us about the places they went, the (many) times they found themselves outside of any action, somewhere back, regrouping or training. Even though Charles More had to rely on notes from many decades ago, it still provides the feeling of actually following the tanks from close by.

It also provides a very good look into the problems the tankers faced, from kicked up dust and nightly operations without a clue where they were, to enemy fire, to finding fuel, or finding a place to stay the night.

Of particular interest to me, a Dutchman, is the account of their exploits in The Netherlands, and the situation of the civilians that Cunliffe describes. Very interesting reading indeed.

The book comes with plenty of photos, a fair number of maps, and a great list of resources at the back ! Recommended for all tank enthusiasts and WW2 researchers.

What we get with the book of More is an interesting essay on the skills and also the errors in the management of an armoured unit belonging to an independent brigade. The book is extremely pleasant and the use of the memories of an undoubtedly empathetic and intelligent individual with Marcus Cunliffe gives an extra touch to this book.

Verdict: An informative and valuable contribution to the history of World War Two that will appeal to readers interested in the campaign in Europe as a whole, the use of tanks and armoured warfare in general and the defeat of Nazi Germany.

The book does include extracts from personal accounts other than Marcus Cunliffe, but they mesh together to tell about an interesting range of experiences involving members of the regiment as they experienced WW2 in NW Europe. A really good read.

I recommend the book in particular to those interested in Tank Warfare some very descriptive actions are found in this book, also those particularly interested in the Normandy Campaign, this book cover some of the most bitter fighting of late summer and autumn 1944. 144 Regiment had in their ranks the Trooper that killed the German Tank Ace Michael Whitman. He was Trooper, Elkins of 144 Regt, who felt that ‘Whitman was slack about his ‘flank protection. And that his previous successes must have been pure good luck.

I recommend the book and award it 4.5 mushroom heads.

‘From Arromanches to the Elbe’ is a superb account of 144 Royal Armoured Corps a Sherman Tank equipped Regiment. Superb detail, excellent accounts & great research. Real insight into the British Armoured experience in WW2.

I found this book to be very informative, and well written. This book is full of documentation which in many other cases is missing and gives a unique insight into the interaction of those who took part in these most uncertain times in the last century. It is also a comparison of how the two sides of this war measured up to each other. This book covers many areas of the conflict and contains many points that could only have been written by someone who was there.

This fascinating book follows the 144th Regt, RAC (Royal Armoured Corps) from landing, on D-Day +8, through the Normandy campaign, into Belgium/Holland, and ultimately across the Rhine. It does so in part through the memoirs of several who served in the regiment, leaning particularly heavily on the writings of Marcus Cunliffe... All in all, an excellent book. Well worth reading.

An excellent account of 144th Regiment RAC in Normandy and beyond. The narrative is interspersed with the author’s opinions on how historians have interpreted events and the book is the better for it. The photographs are good and well chosen, the large scale maps are fine but more detailed maps of local actions would have been useful. Overall an enjoyable read.

CHARLES MORE taught at the University of Gloucestershire where he published numerous books and articles. Since retiring his books have included The Road to Dunkirk (Frontline 2013). He is a Fellow of the Royal Historical Society.