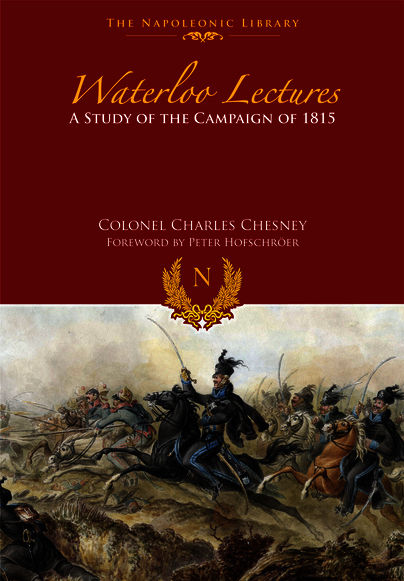 Click here for help on how to download our eBooks
Add to Basket
Add to Wishlist
You'll be £4.99 closer to your next £10.00 credit when you purchase Waterloo Lectures. What's this?
Need a currency converter? Check XE.com for live rates

This classic work covers the period from pre parations for the battle right up to its aftermath. Chesney analysed all the available facts in an impartial and accurat e way, using scrupulous standards of evidence and clear, pre cise arguments.

Waterloo Lectures is a balanced study of the Waterloo Campaign. The author did achieve his stated goal of looking at all the information on the events to determine why they unfolded the way they did. He tried to be fair and assigned blame where it belonged. He criticized Wellington where it was warranted and was harsh on Blücher at times. However there was still a bit of
anti-Napoleon bias in his writing. That being said, the book was ground-breaking for its time and although it has been almost 150 years since it was written, it is still a very thought provoking read on the Waterloo Campaign. It is well worth the money!

This title was first published in 1868, revised second edition 1869, revised third edition 1874, fourth edition reprinted exactly as the third edition in 1907, and revised fifth edition in 1997. The fifth edition is now reproduced here in 2015 complete and unabridged. The author consulted English, German, Belgian and French sources on the battle. His Waterloo Lectures was translated into German and French and approved by such renowned military figures as Moltke the Elder. A number of German and French authorities subsequently offered further evidence that supported the author’s arguments, and which he was able to include this in subsequent English editions.

Following an introduction by Peter Hofschrőer, the text consists of seven lectures initially providing an introduction to the Waterloo campaign, before looking at the preparations and then following the events of 15th to 18th June as they unfolded. The narrative concludes with Grouchy’s retreat into France, concluding reflections and a summary of the campaign as a whole. Also included is a strategical map of the campaign area.

Colonel Chesney presents a series of 7 lectures in his book: Waterloo Lectures, a Study of the Campaign of 1815. The first two chapters serve as an introduction to the campaign and lay the grounds on which the author will treat the subject. Four chapters are then dedicated to the events of the days 15, 16, 17 and 18th of June 1815 whereas the final chapter covers the retreat of Grouchy to France and final reflections on the campaign.

The chapters are divided into three parts each. Part one describes broadly the events of the day. In the second part the author discusses the events of controversy in detail and presents the different points of view of prominent historians adding his personal insights and opinions on the matter. The author constantly refers to Charras, Thiers, Jomini, Clausewitz, the Emperor’s Memoires written at St. Helena and Wellington’s post war letters and documents and tries to debate the different points of view. The final part is a summary of the conclusions and what the author believes has happened on that day.

The work is mainly academic, treating the grand strategy of the most studied campaign in military history. The author assumes that the reader has intimate knowledge of the campaign details in terms of armies, tactics, characters and events and only delves in those subjects of controversy such as Grouchy’s actions and whether or not the latter could have had any bearing on the final outcome of the battle.

This book is highly recommended for the amateur historian with a fair knowledge of the campaign as well as for the professionals looking for a discussion on the different views of the prominent historians who treated the subject.

'Charles Chesney's 'Waterloo Lectures' is one of the most outstanding of the many works written on the great battles of 1815.'