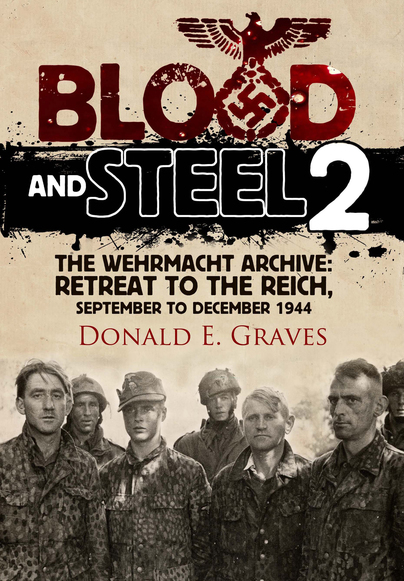 The Wehrmacht Archive - Retreat to the Reich, September to December 1944

Click here for help on how to download our eBooks
Add to Basket
Add to Wishlist
You'll be £4.99 closer to your next £10.00 credit when you purchase Blood and Steel 2. What's this?
Need a currency converter? Check XE.com for live rates

Overwhelmed by the strength of the Allied air and ground forces, following the D-Day landings and subsequent bitter fighting in Normandy, the Germans were compelled to abandon their efforts to hold France and much of the Low Countries and retreat to the Rhine.

The Wehrmacht Archive helps reveal the experience of German soldiers and armed forces personnel as they withdrew through a remarkable collection of translated original orders, diaries, letters, after-action reports and other documentation.

The book also draws upon Allied technical evaluations of weapons, vehicles and equipment, as well as transcripts of prisoner of war interrogations. The reader will learn from official documents about the Germans' efforts to cope with Allied air and artillery superiority, create new tactical methods for all arms and maintain discipline in the face of superior numbers.

Blood and Steel 2, the second book in a series is a collection of annotated documents from the German archives and Allied intelligence files. Canadian military historian Donald Graves naturally focuses on the German forces opposing the First Canadian Army - making the title somewhat of a misnomer as the Germans fighting the Canadians actually retreated into the Netherlands. However, the documents selected are broad enough to provide a good overview of the general German situation in the west and at home in the fall of 1944, making this a valuable addition to any library on the Wehrmacht in World War II...

... An interesting feature of the book is the discussion of the organisation of the German Army and its recovery from the battle of France. Documents give a sampling of how units received replacements and conducted training, how officers were selected, and how units as diverse as a stomach battalion, a V1 regiment, and a Tiger tank battalion were employed.

Prepare yourself for another extraordinary in depth journey into the psyche and mind set of the German Wehrmacht and ordinary people. Seen through the eyes of allied intelligence and reinforced with a plethora of captured and intercepted documents as the entire army front withdrew into its own Reich borders during the often fierce fighting of late 1944. From captured letters home to loved ones, POW Soldaten diary extracts, home front radio broadcasts and opinions of those German Volk under occupation to Divisional front reports, German newspaper headlines and high command battle orders amongst many other sources provide a wealth of information and context to explore what the Germans really thought of the Allies and their views of events surrounding the great retreat to the Reich's fatherland!