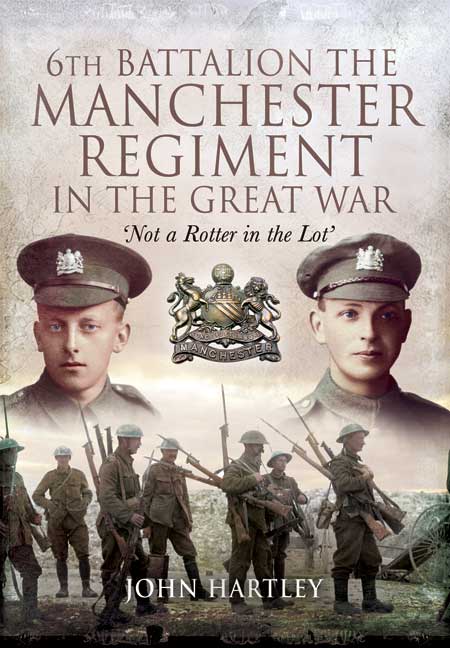 6th Battalion, The Manchester Regiment in the Great War (Hardback)

Add to Basket
Add to Wishlist
You'll be £25.00 closer to your next £10.00 credit when you purchase 6th Battalion, The Manchester Regiment in the Great War. What's this?
+£4.50 UK Delivery or free UK delivery if order is over £35
(click here for international delivery rates)

The 6th Battalion, The Manchester Regiment, was a pre-war Territorial unit. Many of its members held “white collar” positions employed by the City's legal, financial and stockbroking practices or worked for the major commercial organisations trading and manufacturing cotton goods. It went overseas in September 1914, taking with it many new recruits who would undertake their basic training whilst the Battalion formed part of the British garrison in Egypt.

It saw action at Gallipoli from May 1915 until the evacuation at the end of the year and fascinating campaign is dealt with in considerable detail. The Battalion returned to Egypt until the spring of 1917 when it moved to France.

The Manchesters saw regular action for most of 1918, coming under attack in the German offensive in March. Throughout the summer and autumn, the Battalion took part in the Advance to Victory and was still advancing when the Armistice was signed in November.

The book also recounts the history of the second line battalion, the 2/6th Manchesters, from its inception in 1914 until it was all but destroyed in March 1918.

The author draws on official records and personal accounts to tell the story of these fine battalions.

John Hartley is a Cheshire man who worked in and around Manchester. Now retired he lives near Cheadle, Cheshire.


Throughout the book John Hartley gives an honest account of the battles [the regiment] faced and the deaths of not only the officers but the men. This really is their story as we see the war through their eyes, from letters and diaries.

Enough space has been given to the background which balances nicely the need to be about the men and the unit and the battle description which can be read elsewhere. John Hartley has chosen the right formula and, unlike some of these previously unrecorded unit histories, the book stands comfortably on its own. I read it through with ease and pleasure.. An excellent account of the work of the 6th Manchester Regiments, and an enjoyable read.

The Western Front Association, Stand To No 92

This is an excellent example of a battalion history. The text is supported by a large number of photographs, some wartime and some modern, with a good selection of pictures of the various battlefields. Hartley has done a good job of linking incidents, so a nameless soldier mentioned in an extract from a letter or memoir is often identified. There is a good mix of the day-to-day details of life in the army and the wider incidents of the war. Least anyone forget the true cost of the fighting, the book finishes with a twenty-four page long roll of honour, recording the names, date of death and burial place of soldiers killed while serving with the battalion.

Historian and author John Hartley hopes the First World War storylines in Downton will inspire viewers to appreciate the real story of the Manchesters. “It would be great if it encouraged people to look at the history because we can learn so much from it,” said John, who wrote The Sixth Battalion, The Manchester Regiment in the Great War, and whose grandfather fought in the regiment.

A worthwhile history of the 6th Manchesters and their distinguished Great War service from leaving Britain in September 1914 to their return in April 1919. Using personal accounts the author has followed the history of the battalion and of the 2nd line battalion also, from its inception in 1914 to its destruction in March 1918. A superb, well written and well illustrated history of a fine unit. Superb history. 10/10.

A carefully researched work covering the contribution of the 6th Battalion from its inception in 1914 until March 1918.

This is a splendid history of the 6th Battalion, The Manchester Regiment in the First World War.

Military historians will love reading this book which is a descriptive and moving account this brave battalion, a pre-war territorial unit that fought throughout the Great War.

Author John Hartley, a former Probation Service worker who lives in Cheadle, has researched the men commemorated on war memorials in Stockport, many who served in the 6th Manchesters. He has used real life accounts as well as information gathered from careful research.

6th Battalion, The Manchester Regiment of the Great War is the highly moving and descriptive account of a brave battalion that was a pre-war territorial unit that went in and fought throughout the Great War
A fantastic read for military historians.
The battalion left Britain in September 1914 and did not return until April 1919. They began in Egypt with many new recruits who would undertake their basic training whilst the Battalion formed part of the British garrison in Egypt. They moved to fight in Gallipoli and on the Western Front, which the author has told in deserved detail. John Hartley has used real life accounts and has carefully researched not only the magnificent contribution of the 6th Battalion, in words and images, but also that of the Second Line Battalion, the 2/6th Manchester's, from its inception in 1914 until it was all but destroyed in March 1918.
John Hartley was born in North Cheshire, on the fringes of Manchester. He worked for Manchester City Council for a number of years before joining the Probation Service. He is now retired living in Cheadle, Cheshire with his wife. He became interested in the Great War whilst working in Ashton-under-Lyme, the home of the Museum of Manchester Regiment and was prompted to research the 17th Battalion and since researched the men commemorated on the war memorials in Stockport, many who served in the 16th Manchesters, the subject of this book.

The 6th Battalion, The Manchester Regiment was a pre-war Territorial unit. Sent overseas in September 1914, it saw action at Gallipoli from May 1915 until the evacuation. The battalion returned to Egypt until the spring of 1917 when it moved to France. Here, it saw regular action - including in the German Spring offensive.