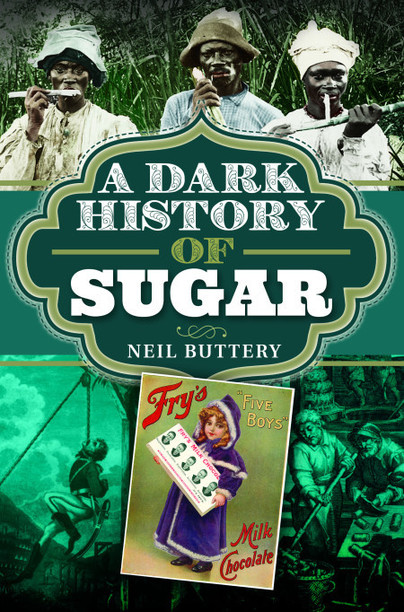 A Dark History of Sugar (Hardback)

Add to Basket
Add to Wishlist
You'll be £20.00 closer to your next £10.00 credit when you purchase A Dark History of Sugar. What's this?
+£4.50 UK Delivery or free UK delivery if order is over £40
(click here for international delivery rates)

A Dark History of Sugar delves into our evolutionary history to explain why sugar is so loved, yet is the root cause of so many bad things.

Europe’s colonial past and Britain’s Empire were founded and fuelled on sugar, as was the United States, the greatest superpower on the planet – and they all relied upon slave labour to catalyse it.

A Dark History of Sugar focusses upon the role of the slave trade in sugar production and looks beyond it to how the exploitation of the workers didn’t end with emancipation. It reveals the sickly truth behind the detrimental impact of sugar’s meteoric popularity on the environment and our health. Advertising companies peddle their sugar-laden wares to children with fun cartoon characters, but the reality is not so sweet.

A Dark History of Sugar delves into our long relationship with this sweetest and most ancient of commodities. The book examines the impact of the sugar trade on the economies of Britain and the rest of the world, as well as its influence on health and cultural and social trends over the centuries.

Renowned food historian Neil Buttery takes a look at some of the lesser-known elements of the history of sugar, delving into the murky and mysterious aspects of its phenomenal rise from the first cultivation of the sugar cane plant in Papua New Guinean in 8,000 BCE to becoming an integral part of the cultural fabric of life in Britain and the rest of the West – at whatever cost. The dark history of sugar is one of exploitation: of slaves and workers, of the environment and of the consumer. Wars have been fought over it and it is responsible for what is potentially to be the planet’s greatest health crisis.

And yet we cannot get enough of it, for sugar and sweetness has cast its spell over us all; it is comfort and we reminisce fondly about the sweets, cakes, puddings and fizzy drinks of our childhoods with dewy-eyed nostalgia. To be sweet means to be good, to be innocent; in this book Neil Buttery argues that sugar is nothing of the sort. Indeed, it is guilty of some of the worst crimes against humanity and the planet.


I have read somewhere that sugar is more addictive than cocaine.....I wouldn't doubt it, it is EVERYWHERE. Try to find something that does not contain sugar in it, in some form, especially your super manufactured products. Products that you just wouldn't think of. I find it especially disturbing that people who previously had no contact with sugar, or products that contain high levels of it, like fizzy drinks, are being persuaded that they just can't live without the stuff.

To be honest, I had no clue that slavery was at the heart of sugar production, in the early days of it. The lengths that slave owners went to, in order to extract the sugar from the sugar cane, beggars belief. Sugar production ruined lives, cultures, flora and fauna of many countries....and so much more. It introduced animals into ecosystems that upset the balance - the canetoad I am intimately familiar with, having lived in Queensland for over 25 years. Those things are revolting and poisonous to domestic animals, to boot.

This book was fascinating but very disturbing reading. The author clearly did a large amount of research and I have to admit that I will never look at sugar cane fields in the same way again.

I loved this book from cover to cover! “A Dark History of Sugar” by Neil Buttery has two distinct sections, the creation of sugar and the consumption thereafter. Neither is gentle but the creation is especially brutal. I am British by genes and I was familiar with our history of involvement in sugar production and that of the United States, but what preceded that was new and to read one well-written and unbiased account of its history is fascinating, and heart breaking. The ramifications of how humans were treated affects us still today.

The consumption side of things is disconcerting in a different way. We have been told lies, had our understanding managed by corporations, in the efforts to raise profits. A food substance has been assigned a value, a status, to be “sweet” is a good thing. The way the brain science speaks into the way we now consume forms of sweetness in new, far too easy ways is mind-shifting! I found this section more surprising than the first but not less disturbing!

Concise, intellectual and page-turning, it is hard to find a historical book that has all three but this one does! I give it five out of five and highly recommended!

'...a welcome publication for those wishing to know about the rise of sugar in our diet, the past involvement in slavery that helped bring that about, and the rise of the ‘Big Sugar’ manufacturing industry.'

Peter Stone, 'A History of London'

A dark history, indeed. When you get behind the history of Sugar and those forced into its production, the darkness is inevitable. Not a pleasant read but definitely an informative one. If you love history, you’ll love this one.

This book was very interesting it covers sugar from its origin, the slave trade right up to examining the modern day obsession with sugar. I never knew the impact the impact sugar had in shaping society today, I will be looking far more closely at my sugar intake after reading. This book really opened my eyes. The book is easy to read, has interesting pictures, is full of facts and history it’s a great read. Loved the vintage fry’s advert on the cover…

Fascinating book makes you realise the power and damage sugar has caused,
Europe’s colonial past and Britain’s Empire were founded and fueled on sugar, as was the United States, the greatest superpower on the planet – and they all relied upon slave labour to catalyse it.
Worth reading.

Neil Buttery has been studying and writing about the history of British food for over a decade. He is also an experienced chef and restauranteur, recreating historical and traditional foods. This combination of academic study and practical cookery has led to appearances on Channel Four’s Britain’s Most Historic Towns and Radio Four’s The Food Programme. Most recently be became resident food historian in Channel 5’s The Wonderful World of Cakes.