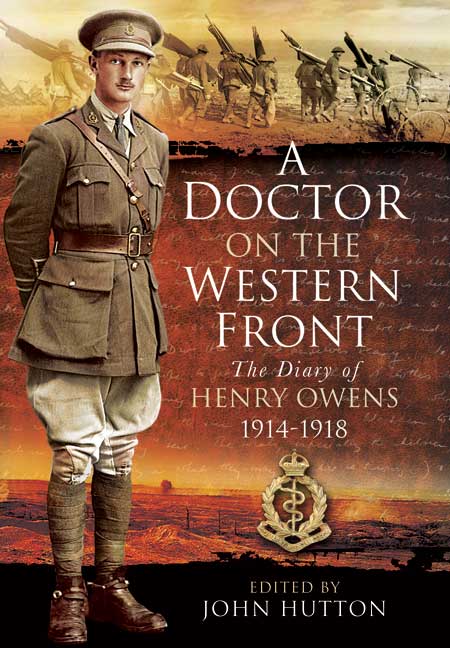 A Doctor on the Western Front (Hardback)

Add to Basket
Add to Wishlist
You'll be £19.99 closer to your next £10.00 credit when you purchase A Doctor on the Western Front. What's this?
+£4.50 UK Delivery or free UK delivery if order is over £35
(click here for international delivery rates)

Henry Owens's Great War diary provides a vivid and complete narrative, seen from the perspective of an army doctor, of what it was like to live and fight in the trenches of the Western Front. Owens, a member of the original British Expeditionary Force, the 'Old Contemptibles', was among the first British soldiers to set foot in France. He spent the next four years in the front line as a doctor and a diarist, an eyewitness to some of the most bitter and violent struggles of the greatest conflict the world had ever seen.

Over the course of those years, he was involved in virtually all the major battles the British fought during the war, in Flanders, around Ypres, along the Somme. He cared for the soldiers of all three armies – British, French and German. Frequently he was under direct fire from artillery, machine guns and rifles, and he faced the same risks and hardships as any combatant. His experiences in the trenches, in ambulances, at first-aid posts and in hospitals gave him a unique vantage point from which to observe the brutality of the fighting and the treatment of the wounded and dying.

Henry Owens's writing, edited and with a full introduction by John Hutton, gives us an inside view of the duties and experiences of a doctor tending the fighting troops, and it paints a graphic portrait of the daily lives of the men themselves.

As seen in Essence magazine.

This is a fascinating account of the life of a medical officer during the First World War, covering a wide range of their experiences, from the big base hospital to operating under shell fire or attempting to treat the wounded right on the edge of the front line.

Henry Owens served as a frontline RAMC medical officer during the Great War and kept a diary of his time there. He was a member of the original British Expeditionary Force ('The Old Contemptibles') and entered the war in France almost from the start. His graphic and vivid notes provide the reader with a unique viewpoint of what it was like to be there during the four years of conflict. He died age 31 in 1921 after a short illness but left the legacy of his diary. A five star read!

The excellent diary of Henry Owens from 1914 to 1918, a doctor who served with the RAMC and which document was discovered in the archives of the Imperial War Museum and brought to a wider readership by the author. This is a fascinating first hand account, enhanced greatly by the diligent research and work of the author in adding additional material. Highly recommended 10/10.

A matchless chronicle of four years on the Western Front served by a Norfolk doctor. The diary he had begun to chronicle his experiences would become one of the most important eye-witness records of the "War to End All Wars"'. His vivid and unvarnished account of life and death on the Western Front has been rescued from obscurity and published following its chance discovery by former Labour Defence Minister John Hutton, now Lord Hutton of Furness'. A testament to the courage and steadfastness not just of one Norfolk doctor but of a vanished army of men who fought and won one of the bloodiest wars in this country's history.

Henry Barton Owens was not a soldier at all, rather a man who like many of his generation, found himself engulfed by extraordinary events. Born in 1889, by the time Britain went to war in August 1914, Henry was a doctor at a time when the Royal Army Medical Corps was several hundred doctors short of establishment. The call went out, Henry volunteered on the day Britain went to war and, remarkably, less than two weeks later he was in France. He would spend the next four years there, documenting what he saw. Overall a good solid account of an officer’s time in the trenches which would sit happily, but unremarkably, alongside other First World War officer memoirs.

An eyewitness to some of the disturbing events in world history.

Henry Owens was born into a doctor’s family in Long Stratton, Norfolk in 1889. When war was declared in 1914 he joined the Royal Army Medical Corps and was sent to France with the British Expeditionary Force.