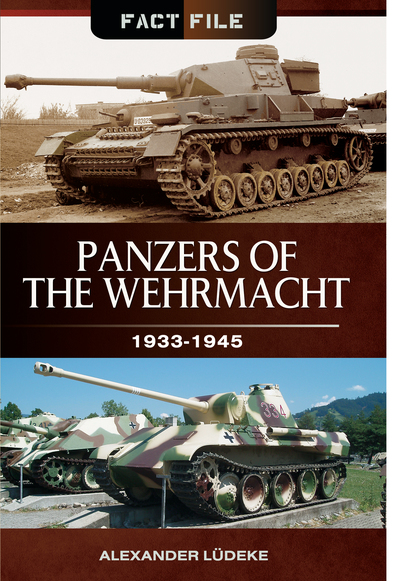 Panzers of the Wehrmacht (Paperback)

Add to Basket
Add to Wishlist
You'll be £12.99 closer to your next £10.00 credit when you purchase Panzers of the Wehrmacht. What's this?
+£4.50 UK Delivery or free UK delivery if order is over £35
(click here for international delivery rates)

Order within the next 8 hours, 25 minutes to get your order processed the next working day!

German Panzers continue to exert a tremendous fascination for military historians and military vehicle enthusiasts alike. To the delight of all fans of tank warfare, this Fact File provides valuable reference on vehicles of the German Wehrmacht. During the Second World War the tank became the main weapon of every army. This Fact File edition provides a concise technical history of German WW2 tanks.

What a great little compilation of the German Panzer series of vehicles. As a model builder of World War II machinery, books such as this are an invaluable resource tool. Alexander Ludeke has condensed these machines into a pocket book full of photos and colored drawings and information about each of the Wehrmacht Panzers between 1933 and 1945. A great addition to the Fact File series!

It is unusual to find a single volume that covers every vehicle and this makes it ideal for military historians, model makers, wargamers and those interested in armour... German wartime vehicles continue to generate widespread interest and this volume will satisfy many that are looking for a simple reference book.

This title in the Fact File series of pocket guides presents a short, but well researched overview of the main developments of the armoured vehicles used by the German army during WW2... This 128-page booklet provides a concise technical history of German tanks of the period.

Panzers of the Wehrmacht is a comprehensive listing of Panzers used by the Third Reich during the Second World War. Historian and author, Alexander Lüdeke, compiles the long list of these Panzers into short, highly detailed synopsis of each tank. The book is broken down into eight chapters spanning this 127-page soft cover book.

From cover to cover, the author has packed this book with excerpts about each tank outlined within. With each of these passages we are given a brief description of the creation and operational history along with a combination of black and white period photographs, museum pictures and colour profile renderings showing us what each of these vehicles look like. Included in each description is an insert table giving us statistical information behind the panzers, such as manufacturer, weights and measurements, fuel capacity, range, armament and more.

Panzers of the Wehrmacht includes all the usual suspects and also takes a look at some of the design concepts and prototypes that never made it on to the production lines. Tank books are always a nightmare because they are, like music and football, open to intense subjectivity; but I have to say that Mr Ludecke really goes for it within the space. I put 2015 down as a bit of a highlight year for German armour in my bit of the world because I got to see a running Tiger, Panzer III and 38T. Hopefully I will add a Panther to the list some time soon.