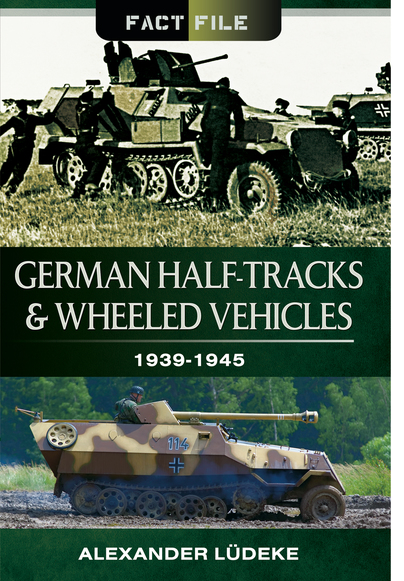 Add to Basket
Add to Wishlist
You'll be £12.99 closer to your next £10.00 credit when you purchase German Half-Tracks and Wheeled Vehicles. What's this?
+£4.50 UK Delivery or free UK delivery if order is over £35
(click here for international delivery rates)

German armoured vehicles continue to generate great interest among historians and military vehicle enthusiasts alike. Many of these lightly armoured vehicles were used for transporting soldiers and in the provision of medical care. Alexander Lüdeke has devoted himself to the Radpanzertechnik in particular in this Fact File volume, providing a concise technical history of these German Military Vehicles.

What a great book. It is small in size but massive in informational purpose. 128 pages of historically accurate reference materials which even includes captured allied vehicles. Unlike the Tank Craft and Land Craft series which is more inclined towards the scale modeler, this book is all about the technical aspects of the vehicles with plenty of photos. Along with action photos are also color photos taken at War Museums and Reenactments. If you want to know more about German Tracked and Wheeled vehicles, don't miss out on this one.

This is a useful short reference work that gives a good overview of the range of wheeled and half tracked armoured vehicles used by the German army. The tone is nicely balanced, praising the more successful designs but also acknowledging their flaws.

Throughout World War 2 the Germans extensively used vehicles to support their armed forces. Some
of these were indigenous designs and others from modified captured enemy vehicles. The range and
scope of these vehicles is very large and the history of these vehicles will appeal to historians and military vehicle enthusiasts.

This volume does a splendid service by presenting the history, technical data, facts and pictures of
these vehicles. Each vehicle and many sub-series are described in great detail. It is a fact based book with numerous period photographs and technical analysis. Having carefully read this volume I can say with great confidence that this book will become a major reference work on this subject. The author has done a splendid job and deserves a 'Well done!'.

A very useful pocket size guide that wouldn’t take up much space on your bookshelf and is easy to dip into if you need to quickly find information...

... In all though, a concise reference book that will be useful to vehicle enthusiasts, modellers and historians alike.

German WW2 armoured vehicles still seem to continue to generate interest. Many of these lightly armoured vehicles were used for transporting troops and in the provision of medical care. This volume in the {i/]Fact File[i] series presents a compact overview of the most important half-tracks and wheeled vehicles, including armoured cars, light and medium armoured personnel carriers, armoured tractors and tracked lorries with technical data, facts and photos as used by the German army in WW2.

Tank books are always a nightmare because they are, like music and football, open to intense subjectivity; but I have to say that Mr Ludecke really goes for it within the space. I put 2015 down as a bit of a highlight year for German armour in my bit of the world because I got to see a running Tiger, Panzer III and 38T. Hopefully I will add a Panther to the list some time soon.

For those of us who have been modelling for many years you can build up a good collection of reference books over time, so some of us may have something similar. However, many of those older books we have are now out of print and difficult to find, so for a modeller who is new onto the scene and hasn't got a one stop reference like this, then this new book will be a good starter.

Each entry includes a description and background notes along with images of either an archive photo of a vehicle as it is now in a museum collection, while many also have some artwork to illustrate camouflage colours and markings. It doesn't promise to cover every single vehicle or variant thereof that the Germans used in WW2 but is covers a very good number of them in such a handy guide. From quite well known types such as the small pre-war Kfz 13, through the series of 4-wheel armoured cars such as the Sdkfz 222, captured equipment including the British Dorchester, the Czech PA-II, French Panhard P 204(f) and many others, before moving on to the larger 6-wheelers.

So if you have an interest in the armoured cars and half-tracks used by the German army during WW2, this Fact File offers a good value little reference to keep on your bookshelf.

This 128 page pocket guide is full of information, facts and figures of every half-track and wheeled armoured combat vehicle used by the Germans in World War II. After a short introduction and glossary, each vehicle is described in a concise technical history with a colour side view of a typical vehicle. Details of the AFV are contained in a reference table of key technical data, including facts about main and secondary weapons and armour thickness. Most vehicles are illustrated with black and white photographs of the subject in action or by colour photographs of the vehicle in a modern museum. The majority of these are from the author’s own collection and many are being seen for the first time.

As well as vehicles that were manufactured by the Germans, AFVs that were captured from enemies or produced by allies are also covered. For example we have the Leichter Panzerspähwagen Mk I 202 (e) (Daimler Scout Car also known as “Dingo”) and the Leichter Panzerspähwagen Linc 202 (i) (The Italian built version of the Dingo that was built by Lancia for the Germans.) Germany produced only a small number of classes of AFVs but within each class there were different types and extensive varieties of sub-versions. For example the well known Sd Kfz 251Half-Track was produced in the Ausf A,B,C and D versions. These were further divided into different vehicle from the 251/1 Armoured Personnel Carrier to the Sd Kfz 251/22 that was armed with the Pak 40, 7.5cm anti-tank gun. Each version that reached production is comprehensively covered in the book. As well as the mainstream vehicles the book also covers experimental vehicles and outlines the numerous captured chassis that were used to produce self propelled guns.

This is unashamedly a pocket guide. Many books have been written on each subject but it is unusual to find a single volume that covers every vehicle. This makes it ideal for military historians, model makers, wargamers and those interested in armour that have only a little knowledge of the subject. Wartime vehicles continue to generate widespread interest and this volume will satisfy many that are looking for a simple reference book that covers all of the half-track and wheeled AFVs used by the Germans in the Second World War. Hopefully this is the first of many in the Fact File series and I am sure it will be well received by the target audience.