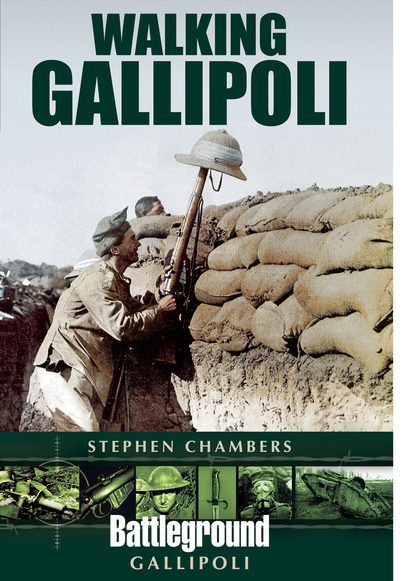 Click here for help on how to download our eBooks
Add to Basket
Add to Wishlist
You'll be £4.99 closer to your next £10.00 credit when you purchase Walking Gallipoli. What's this?
Need a currency converter? Check XE.com for live rates

Gallipoli was a First World War tragedy, a side show that had ambitious hopes to end the war early. Despite the immense gallantry displayed by those fighting, from the beginning, this grand scale 1915 operation was plagued with mismanagement; failure in high places that betrayed the heroism in the field. Though a noble disaster with casualties of over half a million, those who visit Gallipoli today owe it to those who served and died a conscious effort to see beyond the heartbreak and futility, to appreciate the what, the how and the why. There is no better way to do this today other than walking the battlefields with this invaluable guide.

From the beaches and fields of Helles, to the precipitous heights of Anzac and to the plains of Suvla, this book guides the walker to the key points of the campaign. Infamous names that are synonymous with the fighting are covered; Sedd-el Bahr, Krithia, Achi Baba, The Vineyard, Gully Ravine, Kereviz Dere, Lone Pine, The Nek, Chunuk Bair, Lala Baba, Chocolate Hill, Kidney Hill and Kiretch Tepe. All of these features are set in a haunting scene of beauty and tragedy that still pervades this eastern Mediterranean peninsula. In total there are ten walks, some challenging, others not, with a narrative that helps make sense of it all.

Chambers gives us a concise review of the genesis of the campaign and the early failed naval operations.

This fantastic book really helps us to understand the Gallipoli Campaign of 1915 in WW1. With wonderful photographs and maps, a detailed Bibliography and an Index listing the incredible number of different forces involved and the Victoria Crosses (VCs) awarded, it is another ‘must read’ for anyone genuinely interested in the history of the First World War and definitely for anyone planning a visit to Gallipoli.

Fascinating Facts Of The Great War

The format of the guide is such that you can carry it in a pocket and while the photography and illustrations are all mono, they are clear enough to show the sites and routes. It's a handy guide to the visiting historian.

The Battleground Series has become extremely popular, combining thoroughly researched text, great photos and other images, all at a very low price. Gallipoli was a tragedy for many reasons but it was also a battleground where soldiers, airmen and sailors fought with determination and great courage. – Very Highly Recommended.

As well as some excellent tours clearly laid out and given their individual contexts, there is also good advice about when to consider your tour, missing the times when Turks tend to visit and also visitors from Australia and New Zealand. Temperatures in the height of summer are also good to avoid. Less facilities such as restaurants and toilets so more excellent advice on how to ensure you are well prepared for what can be a very peaceful battlefield visit.

These Battleground guides are an ideal size to take with you, easy to fit in a backpack.

The book offers a very valid guide to learn about the places of this unfortunate and ill-planned operation that cost the lives of thousands of Allied and Turkish soldiers.

A new must-have book about this important battlefield. I went to school with Steve so I’m perhaps biased, but this is a superb one volume history & guide. Highly recommended.

In my opinion Gallipoli is the best battlefield I have visited or worked on; simply because the area is relatively unchanged by the ensuing years and the geography is stunning in the context of what happened there. This book is an excellent and concise account of the events at Gallipoli by following the usual framework of walking different routes. These walks stay with you; walking from Lone Pine to The Chessboard tells you all about the tactical importance of the ridge that formed the Turkish front line and the incredible valour of the men who both attacked and defended such exposed positions. It is a panorama of heroism and bravery and this book brings it all into context. If ever you get the opportunity, go to Gallipoli (and take this book). It is a truly stunning place.