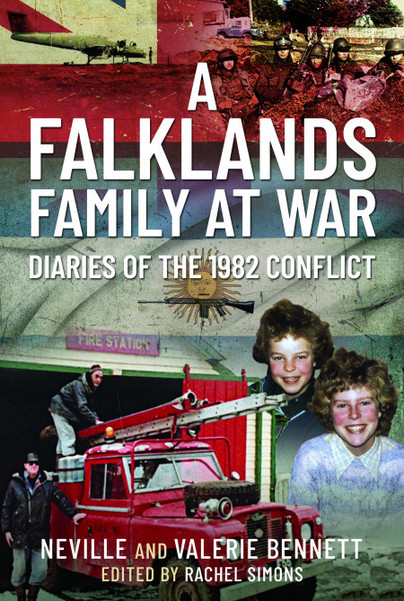 A Falklands Family at War (ePub)

Diaries of the 1982 Conflict

Click here for help on how to download our eBooks
Add to Basket
Add to Wishlist
You'll be £9.98 closer to your next £10.00 credit when you purchase A Falklands Family at War. What's this?
Need a currency converter? Check XE.com for live rates

Many military accounts of the British side of the Falklands War have been published as well as memoirs written by servicemen who took part, so this aspect of the story of the Argentine occupation and the British liberation of this remote territory in the South Atlantic is well known. But little attention has been paid to the Falkland islanders who had direct personal experience of this extraordinary crisis in their history. That is why the previously unpublished diaries of Neville Bennett and his wife Valerie, a fireman and a nurse who lived with their two daughters in Port Stanley throughout the war, is such vivid and revealing reading.

As chief fireman Neville was frequently called out to deal with fires and other incidents during the occupation, and each day he recorded what happened and what he thought about it in his sharp and forthright way. Valerie saw a different side of the occupation through her work at the Stanley hospital where she had to handle the Argentines as well as daily accidents and emergencies.

Their joint record of the exceptional circumstances in the Falklands in April, May and June 1982 gives us a fascinating inside view of family life during the occupation and of their relations with the Argentine soldiers and commanders. It is engrossing reading.

As featured in Carlisle Living

Two frontline workers share their experiences of occupation by the Argentine forces and their liberation by British forces in the Falklands War. A riveting read.

It’s hard to believe that it is almost 40 years since the Falklands conflict, something I remember being in the news & yet I was slightly too young to really understand it. I was almost the same age as Rachel Bennett, a young girl who lived in Stanley in 1982, with her sister Isobel & her parents.
This is the story of the Bennett Family, told through the diaries of mum Valerie, a nurse at the local hospital, and dad Neville who was part of the local fireservice and general all round handyman. The diaries have been collated by Rachel, and at times her own recollections have been added which add a new dimension.

The diaries were an interesting mix of the very ordinary/mundane (eg the washing machine breaking down) and the unique insight that can only come from living through such an experience. I thoroughly enjoyed reading them, discovering the “inside story” of daily life in the Falklands from a civilian’s perspective.

The “Argies” are most definitely seen as the enemy, yet I think they have been fairly portrayed – some were unpleasant but others are described as quite pleasant and simply doing their jobs. In fact at the end of the war, there was genuine astonishment that some of the properties that had been taken over were left immaculate upon their departure.

I am so grateful to have had the opportunity to read this book & highly recommend it to anyone who remembers hearing about the conflict as it gives a really unique insight into what life was like for the ordinary people caught up in the conflict.

Well-written, engaging, and very interesting diary entries detailing a civilian family's perspective of the invasion of the Falkland Islands in 1982. The narrative draws the reader in and I could easily imagine and picture the events based on the authors' descriptions. This is very entertaining and I couldn't read it fast enough and didn't want to put it down. History buffs, such as myself, will find this book about a lesser-known part of history is a must read.

About Neville and Valerie Bennett

Neville and Valerie Bennett lived with their family in Port Stanley during the Falklands War. He was the chief fireman, she was the senior nursing sister in charge of running the hospital. They both kept detailed diaries recording their experiences during the Argentine occupation and then the liberation of the islands by British forces. Their daughter Rachel Simons has edited their diaries for publication.

Neville and Valerie Bennett lived with their family in Port Stanley during the Falklands War. He was the chief fireman, she was the senior nursing sister in charge of running the hospital. They both kept detailed diaries recording their experiences during the Argentine occupation and then the liberation of the islands by British forces.

Their daughter Rachel Simons has edited their diaries for publication.