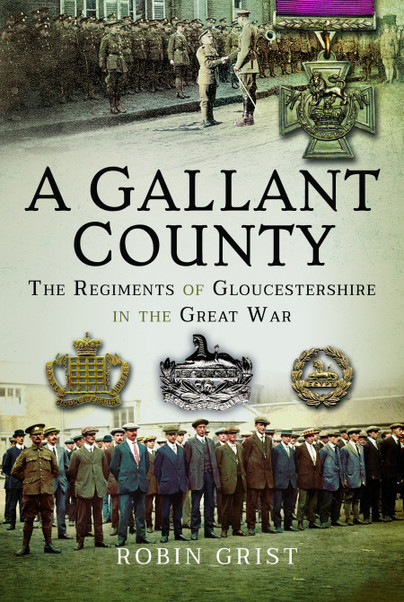 The Regiments of Gloucestershire in the Great War

Add to Basket
Add to Wishlist
You'll be £25.00 closer to your next £10.00 credit when you purchase A Gallant County. What's this?
+£4.50 UK Delivery or free UK delivery if order is over £35
(click here for international delivery rates)

This book describes the campaigns fought by the Gloucestershire Regiment’s sixteen infantry battalions and the 1/1st RGH which saw action on all the Allied fronts. During The Great War the Gloucesters who already had more battle honours than any other regiment won another eighty-two.

Over 46,000 men served in the Gloucesters and the RGH during the First World War without any member of either regiment being charged with either desertion or cowardice. Twenty-five Military Medals were won by 1st Gloucesters at Festubert on one day in April 1918, a record for a single battalion.

A Gallant County captures the contrast between the fighting in the mud of the Western Front, the heat and dust of the Middle East and the horrors of Gallipoli. The author skilfully paints the picture of infantry and cavalry actions in the different theatres. 1/1st RGH were one of only two yeomanry regiments to fight from Egypt to Aleppo.

The use of personal accounts and descriptions of acts of individual and collective gallantry make this a superb record of a County’s outstanding contribution to victory.

★★★★ When Rudyard Kipling wrote his history of the two Irish Guards battalions engaged in the Great Gar he had the advantage of being able to interview many of the survivors, and to cross question them over details. This added an immediacy, which coupled with his graphic penmanship made two volumes of trench incidents almost digestible, and certainly full of character. Robin Grist has not had this advantage. Nonetheless, by use of numerous eye-witness statements and careful research he has managed to make each chapter a useful and interesting account of the heroic and sometimes tragic doings of the regiments. The maps are very good, and the appendices including details of the sparking numbers of awards and regimental statistics are excellent.

This is not really a book to sit down and read from cover to cover, as so much of it deals with the crude low-level engagements, be they infantry or cavalry, Western Front, Gallipoli, Egypt, Mesopotamia or Macedonia. Finally, the regiments of Gloucestershire produced some fine Great War Poets, and this most interesting book has some moving examples.

After retiring he was closely involved in the economic development of Gloucestershire, and was Chairman of the Gloucestershire Community Foundation and a Deputy Lieutenant (1994-2002).