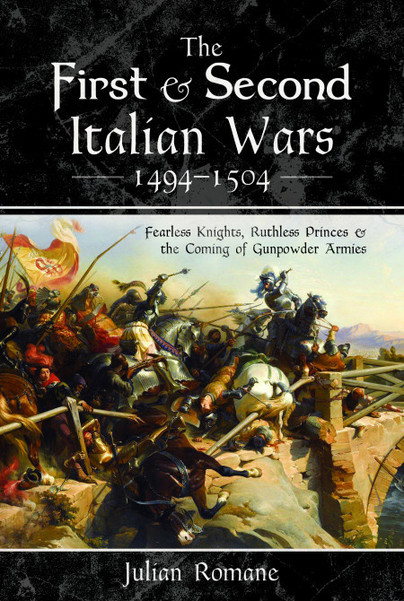 Fearless Knights, Ruthless Princes and the Coming of Gunpowder Armies

The First and Second Italian Wars describes the course of military operations and political machinations in Italy from 1494 to 1504. The narrative begins with the French conquest of much of Italy. But the French hold collapsed. The second French invasion gained Northern Italy. This time, the French allied with the Pope’s son, Cesare Borgia. Cesare managed to double deal too many people; his efforts ended in disaster. The French agreement with the Spanish allowed them to retake Naples only to be defeated at the Garigliano by the famous general, Gonzalo de Cordoba.

These wars were not just another series of medieval fights. These battles were different from what had gone before: the French utilized a new method of artillery transport; the Spanish commander formulated a new system of military unit organization, and Cesare Borgia sought different systems of raising troops and forming states. And all the powers managed to spend vast amounts of money the likes of which no one had imagined before. This was the emergence of the so-called Military Revolution.

"I found the book interesting and useful".

I really enjoyed this book, it provided me with a good understanding of the conflict but also the dramatic changes that took place with military innovation that changed the face of the battlefield. Anyone interested in this period will find this a great book to pick up. I would also recommend this to wargamers, especially those looking at planning a campaign set either during the Italian Wars or in Europe around this time period, as this book will give a good understanding of how the battlefield was changing.

This is a fascinating, detailed look at these crucial wars, placing the military campaigns in their political context – the world that inspired the writings of Machiavelli, and you can see where he got his inspiration from!

This is an amazing account of medieval warfare between two of Europe's principle nations.

This is really interesting read and sheds the light of how combat changed in such a short period of time due to the availability of large sums of money, political and religious will, as well as advances in technology.

I'll be honest, most of my knowledge about this history in this geographical area comes from watching Showtime's The Borgias. Not a bad show, but not always accurate. But, I enjoyed reading this because I was familiar with the events through the show, although things were obviously different and smashed together. So, this was a very quick, enjoyable read. I found it interesting and I appreciated how Romane took me as a reader through the events. It never felt overwhelming and I was able to track a lot of it, from the chronology to the main players and how they changed as people died and fortunes shifted. Very good book on the topic!

The author takes us through the factional and largely dysfunctional world of the Italian city states all seeking security and wealth, which had to be at the expense of their neighbours. The tangled web of alliances, promises and betrayals leveraged by the Spanish and French Kings seeking to expand their interests, is well documented. At centre stage sit the Borgias; Pope Alexander III and his son Cesare; both expertly conniving and manipulating.