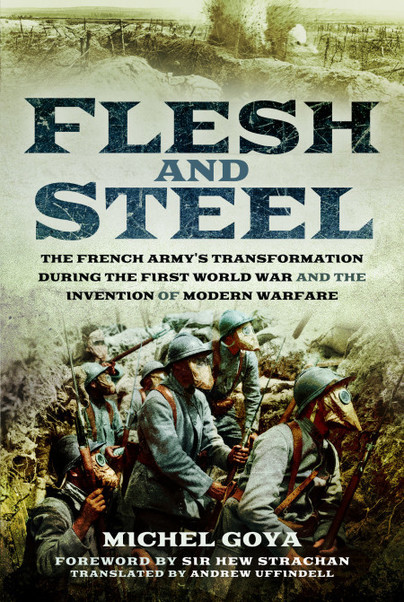 Flesh and Steel during the Great War (ePub)

Click here for help on how to download our eBooks
Add to Basket
Add to Wishlist
You'll be £4.99 closer to your next £10.00 credit when you purchase Flesh and Steel during the Great War. What's this?
Need a currency converter? Check XE.com for live rates

Michel Goya’s Flesh and Steel during the Great War is one of the most thoughtful, stimulating and original studies of the conflict to have appeared in recent years. It is a major contribution towards a deeper understanding of the impact of the struggle on the Western Front on the theory and practice of warfare in the French army. In a series of incisive, closely argued chapters he explores the way in which the senior commanders and ordinary soldiers responded to the extraordinary challenges posed by the mass industrial warfare of the early twentieth century.

In 1914 the French army went to war with a flawed doctrine, brightly-coloured uniforms and a dire shortage of modern, heavy artillery How then, over four years of relentless, attritional warfare, did it become the great, industrialized army that emerged victorious in 1918?

To show how this change occurred, the author examines the pre-war ethos and organization of the army and describes in telling detail how, through a process of analysis and innovation, the French army underwent the deepest and fastest transformation in its history.

This is a massively detailed look at the deepest and fastest transformation that the French Army had ever undergone.

This is a book which upended most of my ideas about the French Army in the First World War and I thoroughly recommend it.

The rapid learning, adaptation and transition which the French army undertook in the period 1914-18 is a process that most armies face when they enter a new war and some armies handle it better than others as the 2017 Army History Conference case studies reveal – one case study citing the 2004 French edition of this book.
Flesh and Steel may not appeal to the general reader. It is really for aficionados of military strategy, grand tactics and tactics; and for students of rapid learning and adaptation during war. It should be essential reading for army officers and its omission from the 2019 Australian Army Reading List is an oversight which the Army Research Centre should rectify in the next list.

A product of his doctoral thesis, Michel Goya, a former Colonel of the French marine infantry, has produced a superb study of the transformation, in all its features, of the French Army during the Great War. The breadth and depth of his work is impressive. Unlike much of the literature on the British Army's learning process during the same conflict, Goya does not confine himself to the period 1914-1918. Instead he takes a longer view, casting his net back to the humiliating defeat of 1870-71 and the impact it had on French thinking and various doctrines during the subsequent forty-three years up to the outbreak of war in August 1914.

Delivered in an easily read style, Goya gets at the heart of how armies learn from previous experience. Not only does he recount what changes occurred, but more importantly what were the factors that drove change and those which impeded it. While change occurs during peacetime; in the end, however, it is the brutal experience of war that drives relevant reforms. This book also highlights the difficulty of drawing correct conclusions from recent war experience; a point that modern critics, with the enormous benefit of hindsight, too often overlook. Goya's Flesh and Steel During the Great War is a worthy addition to any military bookshelf, and serving officers would do well to heed its lessons.

Verdict: A well-written and well-researched body of work that will appeal to anyone with an interest in military history and, more specifically, World War One.

Michel Goya’s Flesh and Steel during the Great War is one of the most thoughtful, stimulating and original studies of the conflict to have appeared in recent years. It is a major contribution towards a deeper understanding of the impact of the struggle on the Western Front on the theory and practice of warfare in the French army.

Michel Goya formulates sophisticated arguments for understanding how armies learn, change and adapt which have ongoing resonances and relevance. I have been urging British publishers to translate Flesh and Steel during the Great War since it first came out, and congratulate Pen and Sword not only on doing so but also on securing Andrew Uffindell to do the work. He has produced a text that is accurate and fluent. In its new incarnation Flesh and Steel will attract fresh readers, among them not only historians of the First World War but also those concerned with the continuing challenges of military innovation and the processes by which it is achieved.