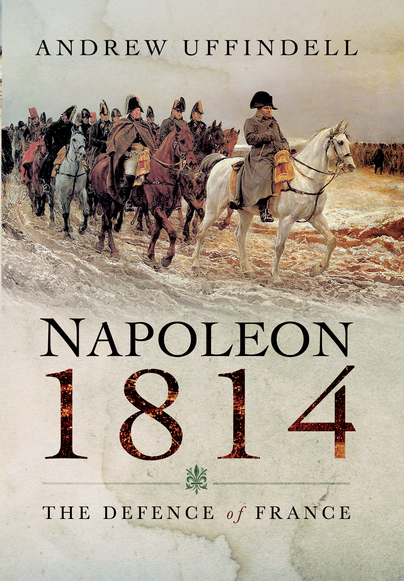 The Defence of France

In 1814, after two successive years of defeat in Russia and central Europe, Napoleon was faced with the ultimate disaster - an Allied invasion of France itself. The conduct of the intense, fast-moving campaign that followed has been widely hailed as one of his greatest feats as a commander, yet it has rarely been described fully and objectively. Andrew Uffindell, in this gripping and original study, reconstructs the campaign, reassesses Napoleon's military leadership and provides a masterly account of a campaign that helped shape modern Europe.

Using numerous eyewitness accounts, Napoleon 1814 records the swift succession of clashes in graphic detail, leading up to the final battle outside Paris, the biggest and bloodiest of the entire campaign, and then the extraordinary drama of Napoleon's abdication. It shows for the first time how the course of the campaign was repeatedly determined by the weather and the terrain. The author also covers events off the battlefield, and examines a strangely neglected aspect of the campaign: the devastating impact on the civilian population. He provides a vivid and moving portrayal of a society traumatised by the brutal experience of war, as ordinary people struggled to survive and confront the moral dilemmas posed by enemy occupation.

Andrew Uffindell's book is an excellent background to the campaign and its place in the Napoleonic panoply, particularly its effect on the 1815 campaign. It is an easy and most enjoyable read. The glossary, references and bibliography are extensive and give weight to this obviously well researched and considered book.

While I was reading this I was constantly fascinated about how one could bring this campaign to life as a wargame. Inspiring stuff! Highly recommended.

This work is highly recommended as a clear description of the campaign, for the grasp of Napoleon’s use of internal lines and for conveying the effect of the terrain in the theatre.

The author has made great use of eyewitness accounts and original source material. He provides a commentary on a set of events that receive far less coverage in English-language publications. Perhaps it is natural for English interest in the wars with the French and Napoleon to concentrate on those aspects with a strong British involvement. The Royal Navy was the principle British military asset that was consistently successful and beyond Napoleon’s capability to counter. On land, the fight was primarily confined to Iberia and the successes of Wellington. Then there was the final victory at Waterloo which was again a fight where Wellington demonstrated his abilities. What happened elsewhere is often overlooked by English-speakers. This book provides an account of the fighting withdrawal from the error of invasion of Russia and the final attempts to defend the homeland of France. Strongly recommended.

In 1814, after two successive years of defeat in Russia and Europe, Napoleon was faced with the ultimate challenge - an allied invasion of France itself. The conduct of the fast moving campaign that followed has been hailed as one of his greatest feats as a commander, yet arguably it has not often been fully and objectively described.

In this book, first published in 2009 and now reprinted in paperback format in 2015, the author re-assesses Napoleon's military leadership and provides an account of this important campaign. The text is divided into four parts - The Gathering Threat, The Campaign of France, Analysis and The Civilian Experience. Included are four appendices covering such aspects as orders of battles, plus 23 maps, a glossary of foreign words, extensive references, a bibliography and an index.

It is respectfully suggested that if this informative book was somehow overlooked the first time it was published, then this paperback version will provide an excellent opportunity to rectify that omission and add a useful title to the Napoleonic bookshelf.

A well written book that is easy to read and comes with a good selection of maps and graphs.

A clear, incisive and detailed analysis of the campaign of 1814 that compliments the earlier,, landmark histories of Houssaye and Petre. Uffindell's clear, descriptive and interesting account combines an overview of the campaign (well-supported by quotes and some superb maps) with a broad analysis of the impact of key factors, such as weather, terrain and sociopolitical considerations, on the actions of the participants.