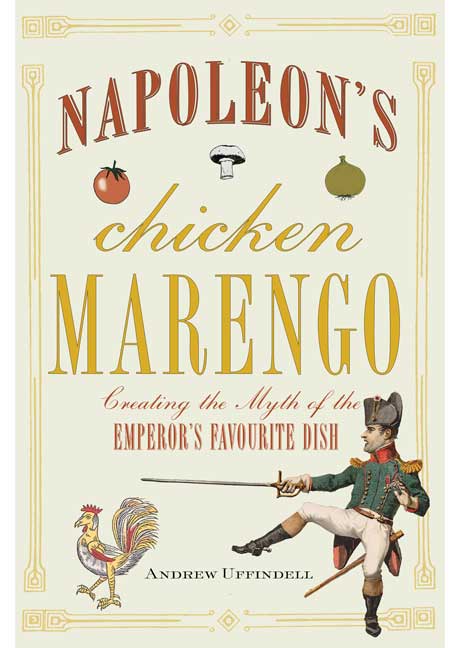 Creating the Myth of the Emperor's Favourite Dish

Add to Basket
Add to Wishlist
You'll be £19.99 closer to your next £10.00 credit when you purchase Napoleon's Chicken Marengo. What's this?
+£4.50 UK Delivery or free UK delivery if order is over £35
(click here for international delivery rates)

This remarkable work tells the story of Chicken Marengo, and cuts through the tangle of myths that has sprung up around it. Supposedly created on the evening of Napoleon's victory at Marengo, the dish rapidly conquered Paris, and became a renowned symbol of French haute cuisine.

The author sets the dish in its context explaining the nail-biting drama of Napoleon's Marengo campaign and the remarkable frenzy of rejoicing unleashed in Paris by the news of his victory. The author argues that the dish is part of a wider myth that Napoleon spun around the battle itself. Uncomfortably aware of just how close he had come to disaster, he rewrote the official account of Marengo. Determined to exploit the political impact of the victory to the full, he portrayed it as a masterly manoeuvre, rather than a near-defeat salvaged largely by luck.

Napoleon's Chicken Marengo demonstrates the persistency of popular myth in shaping perceptions of pivotal events. Uffindel sheds startling light on Napoleon's extraordinary and yet elusive character, and reveals just how effectively he spun a myth around the amount of food he ate in order to project a positive image of himself.

As seen in BBC History Magazine

I’m giving this book to my father, Albert Roux. The story goes that the traditionally French dish chicken Marengo was created by Napoleon Bonaparte’s chef in celebration of Napoleon’s win at the Battle of Marengo in 1800. The book covers French history and delicious food, both of which are loves of mine and my father’s. It’s almost as though it was written for the Rouxs! I’m halfway through it and it’s brilliantly entertaining and educational. What more could you want from a book? Plus I do love chicken Marengo.

Napoleon's Chicken Marengo is a fascinating and very informative account of a battle, a culinary dish and Napoleon. The author has weaved these seperate stories into one very readable narrative. It is a unique take on these stories and I would recommend this book be in any library of books on Napoleon.

This fascinating book tells the story of chicken marengo, and examines the mythology that has grown around it. It is an unusual story, but one that is enlightening and also a very good read, I found it hard to put down. Napoleon's chicken Marengo is a fascinating and very informative account of a battle, a culinary dish and Napoleon. The author has weaved these separate stories into one very readable narrative. It is a unique take on these stories and i would recommend this book be in any library of books on Napoleon.

An engaging read. Most of the stories reward the reader with an item of interest or a humorous or quirky observation.

Fascinating read about Napoleon and what he ate, the French food of the Napoleonic Empire, and the impact of chicken marengo on French cuisine over the past 200 years. It is an entertaining book that will be appreciated by both the serious Napoleonic scholar and those who enjoy good food!

In this imaginative book Andrew Uffindell gives you more than you bargin for. The author interweaves the story of the Battle of Marengo with that of the world-famous dish which took it's name.

[The book] cuts through the tangle of myths that has sprung up around this famous dish.