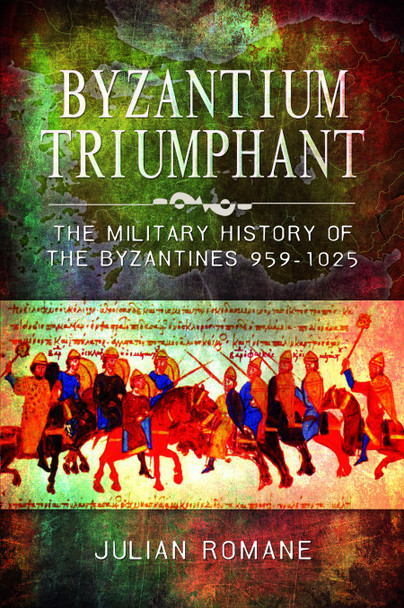 The Military History of the Byzantines 959-1025

Add to Basket
Add to Wishlist
You'll be £10.49 closer to your next £10.00 credit when you purchase Byzantium Triumphant. What's this?
+£4.50 UK Delivery or free UK delivery if order is over £35
(click here for international delivery rates)

Byzantium Triumphant describes in detail the wars of the Byzantine emperors Nicephorus II Phocas, his nephew and assassin John I Tzimiskes, and Basil II. The operations, battles and drama of their various bitter struggles unfold, depicting the new energy and improved methods of warfare developed in the late tenth century. These emperors were at war on all fronts, fighting for survival and dominance against enemies including the Arab caliphates, Bulgars (Basil II was dubbed by later authors 'the Bulgar Slayer') and the Holy Roman Empire, not to mention dealing with civil wars and rebellions.

Julian Romane's careful research, drawing particularly on the evidence of Byzantine military manuals, allows him to produce a gripping narrative underpinned by a detailed understanding of the Byzantine tactics, organization, training and doctrine. While essentially a military history, there is, inevitably with the Byzantine emperors, a healthy dose of court intrigue, assassination and political skulduggery too.

Byzantium Triumphant is a dramatic and well-documented military history of this little-known era.

This is a very good military history of the period.

Overall this is a good contribution to Byzantine history, bringing the period alive in a way that not many books of military history manage. Byzantium emerges as a living culture in its own right, and not as the footnote to Rome or declining power so often seen.

The Roman Empire expanded to rule most of the known world. In the process, it inevitably expanded beyond its ability to administrate. Equally inevitable was the subsequent fall of the Roman Empire, but it was not extinguished. Instead it divided under two Emperors. In the West it did break up and dissolve, but the Eastern Empire continued on and was able to defend itself from attackers to the West and to the East. The author has provided a compelling account of the period of triumph, as the world moved into the Middle Ages. The text is supported by an interesting monochrome photo-plate section. Strongly Recommended.

The book helpfully describes the mystery of Byzantine survival and success at one of the high points, in terms of state power, of the Empire’s roller-coaster ride from founding to dissolution, and can be recommended, with cautions, for its descriptions and conclusions.