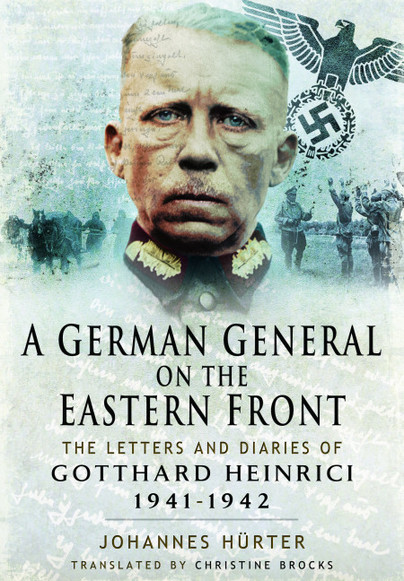 A German General on the Eastern Front (Paperback)

The Letters and Diaries of Gotthard Heinrici 1941-1942

Add to Basket
Add to Wishlist
You'll be £12.99 closer to your next £10.00 credit when you purchase A German General on the Eastern Front. What's this?
+£4.50 UK Delivery or free UK delivery if order is over £40
(click here for international delivery rates)

The Eastern Front, 1941. Operation Barbarossa. Hitler's armies advance into the Soviet Union to conquer Lebensraum in the East. Among the corps commanders is General Gotthard Heinrici, a career soldier, a highly decorated First World War veteran, who observed and recorded in his diary and letters the unprecedented harshness of the German conduct of the campaign. With remarkable candour he described his experiences at the front and the everyday lives of the troops under his command - and the appalling conditions in which the war was fought. In his writings he revealed his growing doubts about Hitler's strategy and his mounting concern as the Wehrmacht was implicated in war crimes and the first actions of the Holocaust. This selection from Heinrici's diaries and letters, edited and with a perceptive introduction by Johannes Hürter, gives a fascinating inside view of the fighting on the Eastern Front from a commander's perspective. It is also provides an unusual insight into the feelings, attitudes and acute anxieties of one of the Wehrmacht's most able generals in the midst of a brutal campaign.

"Dr. Johannes Hurter, a distinguished German historian specializing in this period, discovered Heinrici’s private papers in an archive and edited a German edition similar to the now-avail-able English translation. His expertise in this chapter in German history makes his work especially relevant as a retelling of the opening year of the war on the Russian front."

Pen and Sword should be congratulated for making this book available in English, as it provides an excellent vantage point into the mentalities of the men who led the Wehrmacht during the military decisive and morally bankrupt Barbarossa campaign. Though a map or two would be useful to help orient the reader, this is an important study that deserves a wide readership.

At 176 pages long, this is not a long book and a good proportion of it is made up of an introduction by the author Johannes Hürter which provides an insight into the man that was Gotthard Heinrici, his background, his service in the great war, his thoughts on the early campaigns of WW2, national socialism, racial superiority and so on. There is also a very extensive set of appendices at the end of the book which will be useful to anyone who wants to further research the Barbarossa campaign in more detail.

The bulk of the book however focuses on Heinrici's daily battle reports and private letters sent home to his wife describing his life and the situation of the German army during it’s first winter in Russia. It is mentioned in the introductory text that Heinrici used his influence as a General to get couriers to personally deliver the letters home, meaning they would escape the eye of the censor. From this point of view the account seems a little more heartfelt and truthful than many of the accounts I have previously read.

The entries begin in September when the German advance was still forging ahead and confidence was high, but as the harsh autumn and then winter settles in, Heinrici's mood becomes more sombre and desperate as the advance stalls outside Moscow. He describes with frustration the Partisan situation, the endless supplies of men and materiel that the Russian army are able to throw at his quickly diminishing forces whilst his own supply lines are slowly closed. The lack of winter clothing and suitable accommodation for his troops as temperatures drop to below -40 also further serves to blacken his mood. As you read the text, one can see that the Heinrici of May 1942 has become quite a different person to the one we are introduced to in September 1941.

I’ve read many accounts of the war in the east and although there was quite probably an element of self censorship, I drew the conclusion that there was a lot of truth and emotion behind his words. Facts and figures about his disposition have been omitted leaving the text to flow nicely making this book a very enjoyable and informative read.

The author / editor has made a selection of the General's papers and diary records that provide a very candid insight into the war on that front, together with Hürter's perceptive introduction. A fascinating view and rewarding for the reader. ... The powerful text is supported by a very interesting photo-plate section that includes some images that very graphically portray the harsh winter and equally hostile thaw. A good account of what became a defining turning point in the war.