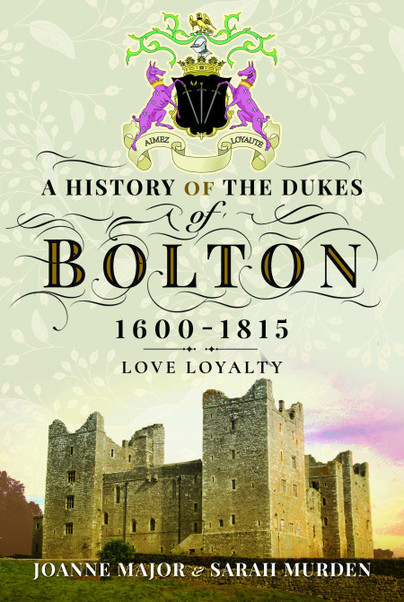 Discover over two hundred years of fascinating history relating to one of Great Britain’s foremost aristocratic dynasties, the (Orde-) Powletts, for several generations the Dukes of Bolton. The family motto, Love Loyalty, references their devotion to the monarchy, but it applies equally to their hearts. Willing to risk all in the pursuit of love, this is the previously untold story of the Dukes of Bolton and their ancestors.

As featured in: 'The Dynasty of 'Lord Winchester': Family of land owners dominated county before commerce led to decline in their power'

This book covers just over 200 years of history of one family as the titles move through the family. It’s 200 years that actually covers a lot of events and royalty in the country, we see how they react and interact with the monarchs in power at the time. I must say that although I had never really heard of the ‘Dukes of Bolton’ I really enjoyed reading about it and what you learn in the book is quite fascinating and revealing. We see how they what their take on the Civil War are and how they cope with that and shall we say odd world of various royals. I think I really enjoyed this book because I was learning about lots of little snippets of information and wasn’t just another drawn-out retelling of a familiar story or part of history. I should say that this book is picture heavy, but there are some great pictures and photographs, they certainly add to the book. This book is certainly a 5-star book for me and I would ask most people to read this as this is something different.

As the title suggests, this book covers the people who would become the Dukes of Bolton. It starts around the start of the Stuart dynasty and continues on through when they were finally granted the peerage and the eventual decline of it. The family was extremely interesting. They lived through so much and had such interesting lives on their own.

Think that dukes are all stuffy and boring? Think again! From suicides to run away lovers, and more - the Dukes of Bolton has had an interesting and colorful history.

Through this book, you are going to watch as the family expands their holdings, survives the English Civil War, and navigates the murky waters that inevitably surrounds the monarchy - you can watch the family evolve and conform to the rules of society at the time. They were unafraid to push their agenda's, and even lie about being ill in order to hedge their bets against the ruling monarch at the time. Intrigue runs deep with this family!

It was highly informative with lots of great facts thrown in! I highly recommend this!

Joanne Major and Sarah Murden are Lincolnshire based ‘super sleuthing’ historians, who enjoy nothing more than bringing the Georgian era to life through their books and blog, All Things Georgian. Their lives were changed forever when they (metaphorically) bumped into an eighteenth-century courtesan.

A History Of The Dukes of Bolton 1600-1815 is their fifth book together and delves even further back in history looking at a ducal family with a long and illustrious pedigree. Joanne Major and Sarah Murden are Lincolnshire based ‘super sleuthing’ historians, who enjoy nothing more than bringing the Georgian era to life through their books and blog, All Things Georgian. Their lives were changed forever when they (metaphorically) bumped into an eighteenth-century courtesan.

A History Of The Dukes of Bolton 1600-1815 is their fifth book together and delves even further back in history looking at a ducal family with a long and illustrious pedigree.

Click here to listen to Sarah Murden on the English Heritage podcast.

Death of the first Duke of Bolton

Charles Paulet, the first Duke of Bolton, died on 27 February 1699. He was described as eccentric, but charming and affable that made him numerous friends. He built Bolton Hall in North Yorkshire in 1678 which still stands today.

Charles Paulet, 2nd Duke of Bolton died 21 January 1722. He was famously described by Queen Anne (of House Stuart) as “a great booby and a lewd, viscous man”.

Lavinia Fenton, died 24 January 1760. Lavinia had been a child prostitute, a waitress, and a barmaid before becoming an actress. She would run away with her lover Charles Powlett, 3rd Duke of Bolton, a man twenty-three years older than herself in 1728 after one of her performances.