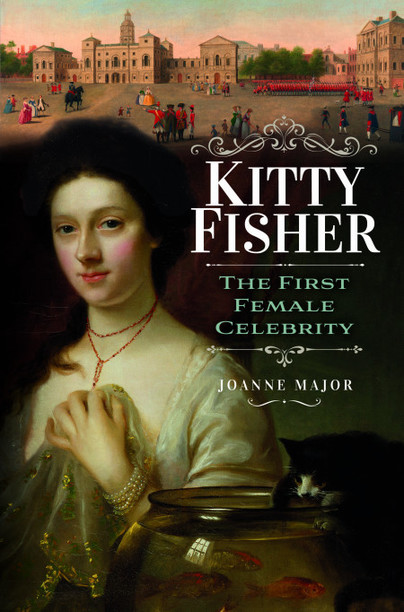 Preorder
Add to Wishlist
You'll be £16.00 closer to your next £10.00 credit when you purchase Kitty Fisher. What's this?
+£4.50 UK Delivery or free UK delivery if order is over £40
(click here for international delivery rates)

not a penny was there in it,

only ribbon round it.’

Generations of children have grown up knowing Kitty Fisher from the nursery rhyme, but who was she? Remembered as an eighteenth-century ‘celebrated’ courtesan and style icon, it is surprising to learn that Kitty’s career in the upper echelons of London’s sex industry was brief. For someone of her profession, Kitty had one great flaw: she fell in love too easily.

Kitty Fisher managed her public relations and controlled her image with care. In a time when women’s choices were limited, she navigated her way to fame and fortune. Hers was a life filled equally with happiness and tragedy, one which left such an impact that the fascinating Kitty Fisher’s name still resonates today. She was the Georgian era’s most famous – and infamous – celebrity.

This is more than just a biography of Kitty Fisher’s short, scandalous and action-packed life. It is also a social history of the period looking not just at Kitty but also the women who were her contemporaries, as well as the men who were drawn to their sides… and into their beds. In this meticulously researched, lively and enjoyable book we discover the real woman at the heart of Kitty Fisher’s enduring myth and legend.


Kitty’s life as a courtesan was a precarious one and, as all celebrities, her fame and power were fleeting. This is a well-researched look at life as a courtesan and in the public eye and might be best read by someone who has a little familiarity with the Georgian era. This makes me want to read this author’s other works about this time period.

This account of perhaps one of the first people who was famous for being famous is a fascinating one. More than a biographical piece, it offers a detailed social history of the time. It highlights the limited options which women had and eloquently describes the impact which the class system had on their lives. A very interesting book which is balanced, well written and clearly well researched.

Joanne Major, author and historian, is fascinated by the eighteenth century and in exploring the hitherto undiscovered women’s history of the period. She holds a degree in Creative Writing from the University of Lincoln and is returning to study for an MA. Joanne lives in Lincolnshire, with her family and dogs, spending most days with one foot in the present and one in the past.