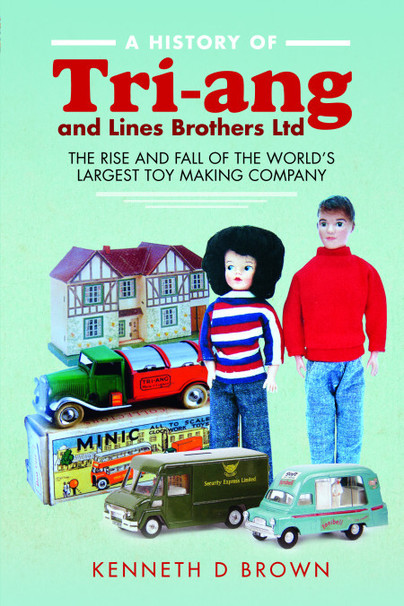 A History of Tri-ang and Lines Brothers Ltd (Hardback)

Add to Basket
Add to Wishlist
You'll be £20.00 closer to your next £10.00 credit when you purchase A History of Tri-ang and Lines Brothers Ltd. What's this?
+£4.50 UK Delivery or free UK delivery if order is over £40
(click here for international delivery rates)

Order within the next 9 hours, 54 minutes to get your order processed the next working day!

The toy industry and its close relationship with children’s artefacts and equipment made a significant contribution to the light industries which came to increasing prominence in the British economy over the twentieth century as traditional heavy manufacturing declined. The demand for toys, both national and international, accelerated after the Great Exhibition of 1851 and two brothers, George and Joseph Lines, were among the most prominent of the manufacturers to emerge in the Victorian period. However, it was Lines Brothers Ltd., formally incorporated in 1919 by Joseph’s three sons, which very quickly established itself as the leading British toy company, overcoming the vicissitudes of depression and world war to become the world’s largest toy manufacturer by the 1950s. With operations in many parts of the world it was arguably the world’s first multi-national toy company, enjoying something of a golden age before collapsing spectacularly in the face of intensifying international competition and a changing economic climate.

This is the fascinating story of a family business whose iconic Tri-ang trademark was universally recognised and whose most famous products included model railways, Spot-on and Minic cars, soft toys, Pedigree prams, dolls’ houses, Scalextric, and Cindy dolls. It is a serious economic, business and industrial history, touching on important themes such as the interplay between government and business, the nature of entrepreneurship, the significance of company culture and organisation, and the changing nature of childhood. Above all, it is a story of strong personalities, familial tensions, and an underlying determination to bring delight to children.

I read this book because my own father used to be a huge collector of small cars and toys when he was younger, in fact, if I had a look in his loft he might still have a few floating about. So my interest was kind of a shared interest and a hope to see a number of pictures of toy cars and learn more about them. The book is very much a book about the history of a toy company like the title says, it was very much a case of good ideas prospering in a small business doing well to a certain point until other business activities, trends, and society would eventually see the slow spiral downwards to the business coming to an end. This was a nice story about a small business, I would say that this would be a fascinating book for people who knew the company when it was in its heyday or people who like to buy and collect small cars and toys.

Professor Kenneth D Brown is Emeritus Professor of History at Queen's University Belfast and a specialist in modern British political, economic and social history, in the 19th and 20th centuries. He is the leading expert in the history of the toy industry. He is a Fellow of the Royal Historical Society and Academy of Social Sciences. His publications include The Unknown Gladstone: The Political Life of Hebert Gladstone, 1854-1930 ; The British Toy Business: A History since 1700 (1996); Factory of Dreams: A History of Meccano Ltd, 1901-1979 (2007); The British Toy Industry (2011); plus many works on modern British economic and social history, entries in the Dictionary of National Biography, and articles in peer reviewed journals.