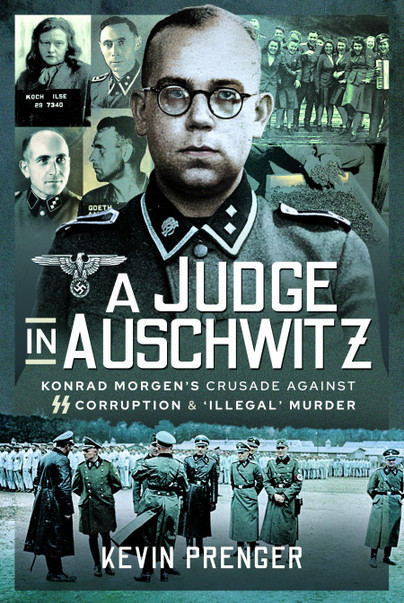 A Judge in Auschwitz (Hardback)

Preorder
Add to Wishlist
You'll be £16.00 closer to your next £10.00 credit when you purchase A Judge in Auschwitz. What's this?
+£4.50 UK Delivery or free UK delivery if order is over £35
(click here for international delivery rates)

Worse, Morgen also discovered that inmates were being killed without authority from the SS leadership. While millions of Jews were being exterminated under the Final Solution programme , Konrad Morgen set about gathering evidence of these ‘illegal murders’.

Morgen also visited other camps such as Buchenwald where he had the notorious camp commandant Karl Koch and Ilse, his sadistic spouse, arrested and charged. Found guilty by an SS court, Koch was sentenced to death.

Remarkably, the apparently fearless SS judge also tried to prosecute other Nazi criminals including Waffen-SS commanders Oskar Dirlewanger and Hermann Fegelein and Auschwitz Commandant Rudolf Höss. He even claimed to have tried to indict Adolf Eichmann, who was responsible for organising the mass deportation of the Jews to the extermination camps.

This intriguing work reveals how the lines between justice and injustice became blurred in the Third Reich. As well as describing the actions of this often contradictory character the author questions Morgen’s motives.

Kevin Prenger is a writer of World War II history, living in his native Netherlands. He is the chief editor of the website TracesOfWar.com and also contributes to the Dutch online history magazine Historiek.net. His previous works include War Zone Zoo, the history of the Berlin zoo during World War II and Christmas under Fire, 1944. A Judge in Auschwitz, previously published in Dutch and Polish, is his third book translated in English.