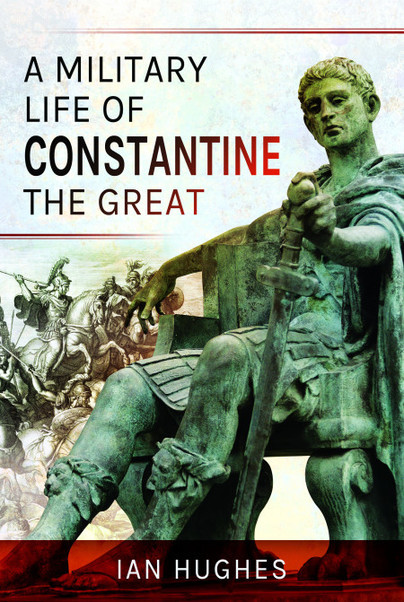 A Military Life of Constantine the Great (Hardback)

Add to Basket
Add to Wishlist
You'll be £25.00 closer to your next £10.00 credit when you purchase A Military Life of Constantine the Great. What's this?
+£4.50 UK Delivery or free UK delivery if order is over £35
(click here for international delivery rates)

Much of Constantine I’s claim to lasting fame rests upon his sponsorship of Christianity, and many works have been published assessing whether his apparent conversion was a real religious experience or a cynical political manoeuvre. However his path to sole rule of the Roman Empire depended more upon the ruthless application of military might than upon his espousal of Christianity. He fought numerous campaigns, many of them against Roman rivals for Imperial power, most famously defeating Maxentius at the Battle of the Milvian Bridge. In this new study, Ian Hughes assesses whether Constantine would have deserved the title ‘the Great’ for his military achievements alone, or whether the epithet depends upon the gratitude of Christian historians.

All of Constantine’s campaigns are narrated and his strategic and tactical decisions analysed. The organization, strengths and weaknesses of the Roman army he inherited are described and the effect of both his and his predecessors’ reforms discussed. The result is a fresh analysis of this pivotal figure in European history from a military perspective.

Flavius Valerius Constantinus (Constantine I , also called the Great) was a Roman Emperor from 306 to 337 AD. He is perhaps best known as the first Christian Emperor of Rome and many of the books written about him, focus on his conversion and its effects on the world, A new book by Ian Hughes, does something different, as his title says, A Military History of Constantine the Great (Pen & Sword Military 2020.)

Hughes’ story really starts at the end of the 3rd Century when the Roman empire seemed to be exploding – emperors coming and going, usually under the knives of their bodyguards. Emperor Diocletian began a series of reforms that led to what is called the Tetrarchy where east and west Rome were rules over by an Augustus and a Caesar (aka co-Augustus.) He also brought about multiple military reforms as well. Hughes starts his story here then shows Constantine emerging into it.

I was surprised to learn that Constantine was not always in and part of the Eastern Roman Empire. He actually got his start after joining his father in Britain, where Constantius was the Augustus, ruling Britain, Gaul and Hispania, while his Caesar (Severus) ruled Italy and Africa. Constantine was acclaimed Augustus when his father died in 306. The book then follows the new Augustus across into Gaul and literally across Europe, dealing with barbarian invasions, triggered by the internal squabbles among Roman emperor-wannabes in the 3rd Century. He spent the first six years of his rule campaigning along the Rhine River.

Ultimately, the Tetrarchy essentially just limited the warring Roman leaders to four, leading to war between the Augustus’s and Caesars. Constantine invaded Italy on 312 and defeated his Caesar at the battle of Milvian Bridge, thus becoming the Western Emperor. He moved against the East in 318, defeating the eastern Augustus Licinius at Chrysopolis in 324, to become the sole Roman Emperor. He would spend his remaining years in various campaigns, before dying in 337 while preparing to battle the Persians.

Hughes doesn’t just follow the military campaigns; he also adds considerable analysis on the period, including the political wranglings, social and military reforms, both structural and tactical, within the Empire in general. He tells what he knows, what he surmises, and what he doesn’t know from his studies. What you get is an excellent glimpse of an Empire trying to regain the stability is had before the 3rd Century troubles – and not really succeeding. With some decent empire ranging maps, plus a good list of primary and secondary sources, Hughes has provided an excellent overlook of an important individual of Late Rome’s history.