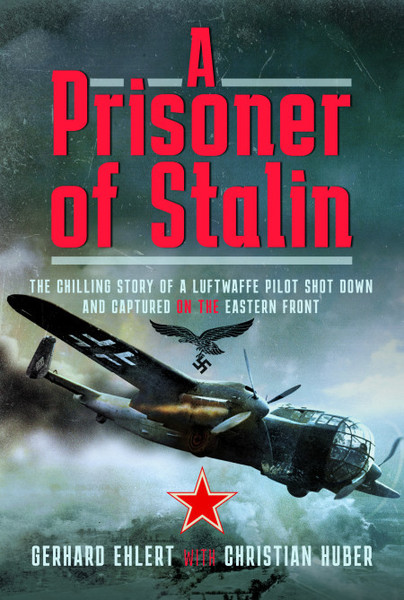 A Prisoner of Stalin (Hardback)

Preorder
Add to Wishlist
You'll be £16.00 closer to your next £10.00 credit when you purchase A Prisoner of Stalin. What's this?
+£4.50 UK Delivery or free UK delivery if order is over £40
(click here for international delivery rates)

Leutnant Gerhard Ehlert was one of the few survivors of 2. Nachtaufklärungsstaffel, part of the Luftwaffe’s 6th Air Fleet, which operated on Eastern Front during the Second World War. Although he came from a family that spoke out against Hitler and the Nazi regime, he volunteered to join the Luftwaffe. He went on to undertake combat patrols under the most extreme circumstances.

Facing hazardous weather conditions – often landing his aircraft ‘blind’ in heavy fog – and mountainous odds against Soviet air superiority, Ehlert completed twenty-two sorties before his Dornier Do 217M-1, coded K7+FK, was shot down on 14 June 1944. Despite strenuous efforts to escape the Soviets, along with his rear-gunner Feldwebel Wilhelm Burr, he was captured by the Red Army. What followed changed his life forever.

Though interrogated repeatedly, Ehlert revealed nothing about his missions or duties. Then, during his transfer to a prisoner of war camp, he had to face a hostile crowd of Russian civilians who had suffered from the devastating effects of the Luftwaffe’s bombs. In the long journey eastwards across the bleak Russian steppes to the camp at Yelabuga, a town in the Republic of Tatarstan, Ehlert reflected on his early years and the road he took to the east and the horrifying situation he was in. But it was not the months he endured in the freezing prisoner of war camp which became his most haunting memory – it was when the war ended.

The Russians announced that with peace came new rules. Now the prisoners must work and the food ration would be reduced. Their uniforms were removed, and all privileges of rank dismissed. To the Soviets they were no longer prisoners of war, they were mere criminals and were treated accordingly.

Transferred to Bolshoy Bor in the north, day after day the men had to transport logs, even through the snow and ice of winter, with many of the prisoners dying of malnutrition and exposure. The Russians told them they were ‘to rebuild what they destroyed in the Soviet Union’.

Ehlert’s suffering finally ended in 1949. He was able to return to his parental home, initially being treated as an unwelcome stranger. When he related his story to Christian Huber, Gerhard Ehlert was in his 90s, by then a happy father and grandfather, and undoubtedly a survivor.

GERHARD EHLERT was one of the few survivors of the Luftwaffe’s 2nd Long-Range Reconnaissance Group, part of the 6th Air Fleet, which operated on Eastern Front during the Second World War. Captured in June 1944, he did not return to Germany until 1949. When he related his story to Christian Huber, Ehlert was in his 90s, by then a happy father and grandfather, and undoubtedly a survivor.

Born in Wasserburg am Inn, Germany, in 1964, CHRISTIAN HUBER has worked as a journalist for some twenty years. As well as being the publisher of a weekly newspaper in south-east Bavaria, he has also published a number of books relating to the events of the Second World War.