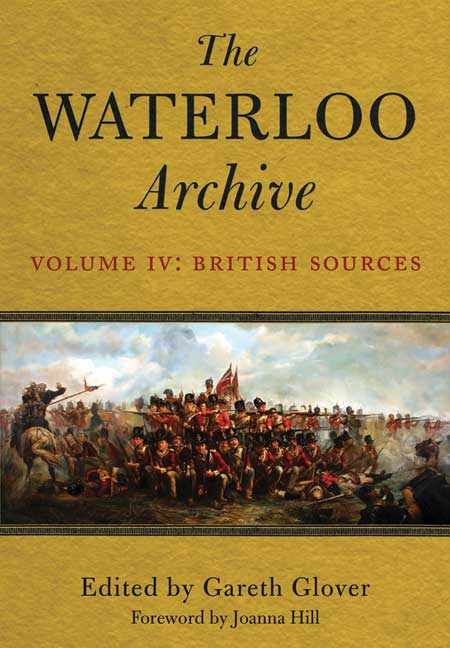 Click here for help on how to download our eBooks
Add to Basket
Add to Wishlist
You'll be £4.99 closer to your next £10.00 credit when you purchase The Waterloo Archive: Volume IV. What's this?
Need a currency converter? Check XE.com for live rates

WATERLOO ARCHIVE VOLUME IV contains letters and journals written largely in the immediate aftermath of the whirlwind campaign of 1815, both from the frontline troops and the support services, including medical reports and those of civilians.

This volume includes: Letters by Sir Hussey Vivian and a much fuller version of the famous description by Frederick Ponsonby of his wounding and his subsequent adventures whilst lying on the battlefield during and after the battle.

The correspondence of officers in the infantry such as John Gardiner and George Barlow of the 69th Foot, and Daniel Mackinnon, famous for the defence of Hougoumont.

Representing the cavalry, we have Captain John Whale, Lifeguards, who appears to have written the opening circumstantial narrative of 'A Near Observer' for Miss Eaton and George Packe of the 13th Light Dragoons, and those who were not on the field during the battle such as Arthur Kennedy of the 18th Hussars and Dixon Denham of the 54th Foot.

A series of letters to Sir Charles Bell from various surgeons attending to the wounded in Brussels give both a fascinating and appalling view of the consequences of war.

A fascinating description from a witness of Napoleon onboard HMS Bellerophon at Plymouth including an original drawing of him before he sailed into exile on St Helena and a journal of a marine officer during the subsequent passage.


I have read all four volumes of The Waterloo Archive and this is my favourite. The material is much more focused on Quatre Bras and Waterloo than the other volumes. Additionally, the quality of the writing is much better -- the writers of the letters are able to clearly describe in detail, the events they witnessed. Gareth Glover, as usual, does a superb job editing the book and provides background information on individuals and places mentioned by the soldiers in their letters. It is another welcomed addition to my Waterloo library.

Another superb collection of original material.

Studies of military strategy relating to major battles often ignore the human element, the way in which individual soldiers can change affairs - or even what it means to them. This is a fascinating collection of archive material relating to the 1815 war - much of it little known. It contains letters and journals written by frontline troops including medical reports and civilian accounts. It covers both the cavalry and the infantry. The journal of Private Thomas Playford of the 2nd Life Guards gives an interesting account of the famous charge of the heavy cavalry against D'Erlon's attack. There are even accounts from an unnamed officer taking Napoleon into exile on St Helena in which Napoleon told him that he had not expected to go into battle when he did! It shows too how the officers attempted to maintain some kind of social life, bringing over their mess bands and dress appointments. Overall, it is an interesting, very detailed book. It is a book for dipping into, exploring different facets of the battle. For military historians and social historians of the period it makes essential reading.