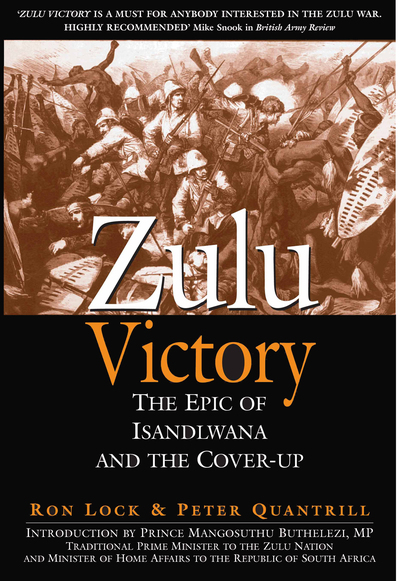 The Epic of Isandlwana and the Cover-up

Click here for help on how to download our eBooks
Add to Basket
Add to Wishlist
You'll be £4.99 closer to your next £10.00 credit when you purchase Zulu Victory. What's this?
Need a currency converter? Check XE.com for live rates

The Battle of Isandlwana – a great Zulu victory – was one of the worst defeats ever to befall a British Army. At noon on 22 January 1879, a British camp, garrisoned by over 1700 troops, was attacked and overwhelmed by 20,000 Zulu warriors. The defeat of the British, armed with the most modern weaponry of the day, caused disbelief and outrage throughout Queen Victoria's England. The obvious culprit for the blunder was Lieutenant General Lord Chelmsford, the defeated commander. Appearing to respond to the outcry, he ordered a court of inquiry. But there followed a carefully conducted cover-up in which Chelmsford found a scapegoat in the dead – most notably, in Colonel Anthony Durnford.

Using source material ranging from the Royal Windsor Archives to the oral history passed down to the present Zulu inhabitants of Isandlwana, this gripping history exposes the full extent of the blunders of this famous battle and the scandal that followed. It also gives full credit to the masterful tactics of the 20,000 strong Zulu force and to Ntshingwayo kaMahole, for the way in which he comprehensively out-generalled Chelmsford.

This is an illuminating account of one of the most embarrassing episodes in British military history and of a spectacular Zulu victory. The authors superbly weave the excitement of the battle, the British mistakes, the brilliant Zulu tactics and the shameful cover up into an exhilarating and tragic tale.

An excellent study.
Very detailed analysis of the victory of the Zulu Army against the British in January 1879.