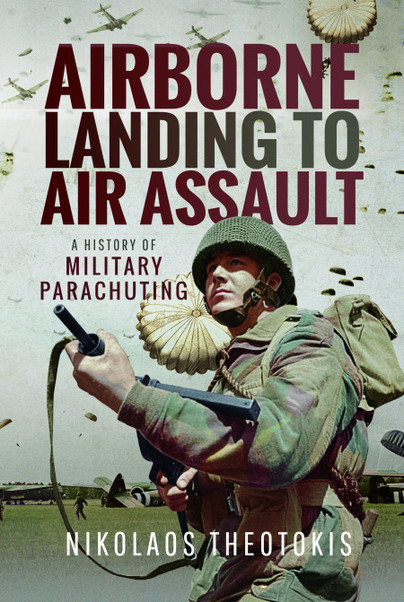 A History of Military Parachuting

Add to Basket
Add to Wishlist
You'll be £25.00 closer to your next £10.00 credit when you purchase Airborne Landing to Air Assault. What's this?
+£4.50 UK Delivery or free UK delivery if order is over £35
(click here for international delivery rates)

Many books have been written about military parachuting, in particular about famous parachute operations like Crete and Arnhem in the Second World War and notable parachute units like the British Parachute Regiment and the US 101st Airborne Division, but no previous book has covered the entire history of the use of the parachute in warfare. That is why Nikolaos Theotokis’s study is so valuable.

He traces in vivid detail the development of parachuting over the last hundred years and describes how it became a standard tactic in twentieth-century conflicts. As well as depicting a series of historic parachute operations all over the world, he recognizes the role of airmen in the story, for they were the first to use the parachute in warfare when they jumped from crippled aeroplanes in combat conditions

Adapting the parachute for military purposes occurred with extraordinary speed during the First World War and, by the time of the Second World War, it had become an established technique for special operations and offensive actions on a large scale. The range of parachute drops and parachute-led attacks was remarkable, and all the most dramatic examples from the world wars and lesser conflicts are recounted in this graphic and detailed study. The role played by parachute troops as elite infantry is also a vital part of the narrative, as is the way in which techniques of air assault have evolved since the 1970s.

"...succeeds in its goal to provide an history of military parachuting, and Nikolaos Theotokis is the right author to deliver such a history."

The book, at just over 300 pages, is an excellent starting point to learn about all the airborne forces in the world.

I would have preferred more photographs and illustrations throughout the book, and that’s really my only criticism. I enjoyed the book immensely and found it an interesting read, it’s an incredibly well researched book. It’s definitely going to appeal to a lot of military history enthusiasts, along with anyone who has served in the airborne forces. In regard to war gamers, it will provide good research for background reading for anyone planning to build an army centred around airborne forces. Especially those considering a campaign game set against the backdrop of Operation Market Garden. It’s one of those books that everyone interested in modern warfare should put on their list to pick up.

A new and unparalleled work in the literature on the history of parachuting. A fascinating book which keeps the reader's interest undiminished until the last page.

Article: 'The "Bible" of the paratrooper and more!' as featured by

This is the first book to provide a detailed history of the military parachute and its use to revolutionize warfare. The author provides an impressively researched account, and a very good b&w photo-plate section gives illustration in support of the text. – Very Highly Recommended

The thought of parachuting feels me with real terror - this book is really a tribute to all the men who found themselves having to do it during times of war.

Nikolaos Theotokis, a former Greek army paratrooper, is a journalist who has reported on conflicts around the world, including the Iran-Iraq War, the Gulf Wars, the Yugoslav conflict, the Falklands War and the Troubles in Northern Ireland. He has also written extensively on defence matters and has worked for newspapers, magazines, radio and television stations in Athens. He is the author of the book, published in Greek, Γυναίκες και Πόλεμος (Women and War).