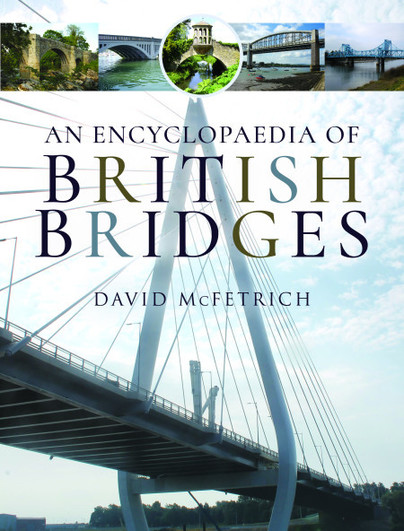 An Encyclopaedia of British Bridges (Hardback)

Add to Basket
You'll be £60.00 closer to your next £10.00 credit when you purchase An Encyclopaedia of British Bridges. What's this?
+£4 UK Delivery or free UK delivery if order is over £30
(click here for international delivery rates)

Foreword written by Nick Baveystock, Director General and Secretary of the Institution of Civil Engineers: David McFetrich has created a wonderful encyclopaedia. This is not just a list of British bridges: it is also a social history of a nation continually growing in industrial power and might, of engineers and architects striving to create beauty and purpose out of functionality, and of the real heroes of the tale, the bridges that underpin our very existence.

Bridges have a universal appeal as examples of man’s mastery of nature, from picturesque packhorse bridges to great spans stretching across broad estuaries, and the development of the technology that allows ever more audacious constructions is never-ending.

Of the million or more bridges throughout Great Britain, David McFetrich has selected those that are significant in terms of their design, construction or location, or of their connections with people or events of history. His definitive book contains 1,600 separate entries for individual bridge sites or related groups of bridges covering more than 2,000 different structures, 165 general entries about different types of bridge and such topics as collapses and failures, and a summary of about 200 record-holding bridges in 50 different categories. The concise text is supported by more than 900 illustrations and diagrams..

The result is a fascinating and readily accessible compendium.

A guide of wonders coupled with a very instructive technical documentation.

... for all the wealth of information it still manages to be incredibly readable, well researched and comes highly recommended.

This is a wonderful read.

Article: 'Red letter day as popular park opens for the first time' as featured by

Featured on the 'Christmas Bookshelf'

This volume is well-written and researched and eminently readable, to the extent that this reviewer could find little to fault it... Because of the ubiquity of bridges throughout Great Britain, this volume should have wide appeal. Being an encyclopaedia, it is eminently suitable for random ‘dipping-type’ subject- searching and would be entertaining on that basis alone. Historians and those interested in bridges in both civil-engineering and general interest areas may find it of interest, while readers seeking information about a local bridge-type structure may also find it worthy of their attention.

Article: 'Spanning history in pages of unique bridge encyclopaedia' as featured by

"This encyclopaedia is not only a ‘traditional coffee table’ item to peruse at your leisure, it is also a valuable resource to use in conjunction with an Ordnance Survey Map if you plan to visit some of these structures while on holiday or are merely planning a day out."

Every time I open the book, I discover something new, and I imagine most readers will find the same.

The only book of its kind to detail British bridges.

This book is aimed at the general reader but the author would like to think that it will also encourage youngsters into what must be one of the world's most exciting, demanding and worthy careers. Not only is designing and building bridges hugely challenging but it helps build the future for everyone.